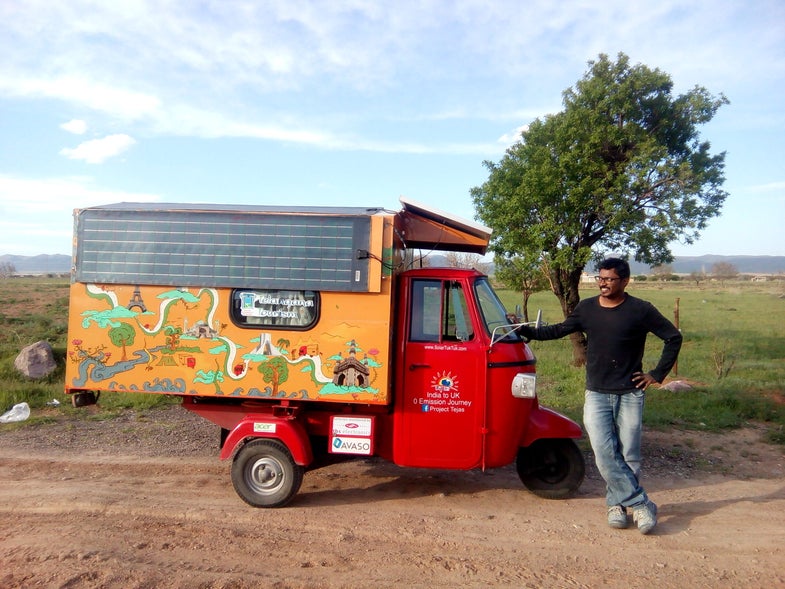 Billed as the largest electric rally in the world, the sixth WAVE Trophy Rally will take place June 10-18. It begins in Germany and ends in Geneva – for most of the 80 projected participants. But not for Naveen Rabelli.

Rabelli, an automotive engineer, designed a solar-powered tuk tuk, or three-wheeled powered rickshaw, for the competition. The Tuk-Tuk Tejas, as he named his entry, will not only cover the 1600 km (nearly 1000 miles) of the WAVE Trophy Rally itself; he’s also driving it from Bangalore, India, to the competition, about 8800 km (about 5500 miles).

The Tuk-Tuk Tejas is solar-powered, so Rabelli plans to travel only about 100 km a day, or 62 miles. At that pace, it will take him about 100 days total to reach the rally. Even after accomplishing all that, Rabelli hopes to push on in his creation, all the way to London. He’s been testing his design for the past four years in preparation for this epic, if slow, solar-powered journey.

By building the Tuk-Tuk Tejas, Rabelli is following the lead of the WAVE Trophy’s founder and director Louis Palmer, who in 2008 drove his Solartaxi around the world. The project intended to draw attention to solar power and zero-emissions vehicles, and he received a “Champion of the Earth” award from the United Nations for his efforts.

Rabelli wants to move those goals forward, especially in demonstrating the reliability of solar power and connecting with others who are working toward sustainable living solutions. The other teams will be bringing a mix of commercially available plug-in electric cars, like the Tesla Model S and a Zero S motorcycle, and home-built conversions, like a Citroen 2CV and a Saab 900 convertible.

On May 4, according to Rabelli’s Facebook page, he’d crossed through Iran and entered Turkey – right on schedule. His calculations showed that he’d generated 24 kWh of solar energy as he traveled 2800 km (1739 miles) through Iran, saving 175 liters (46 gallons) of gasoline. He’ll next travel through Bulgaria, Serbia, Hungary, and Austria on his way to the WAVE Trophy starting line in Bremerhaven, in northern Germany, on June 11.