This is what happens when police, military folks, and scientists get together to play with very expensive robots. 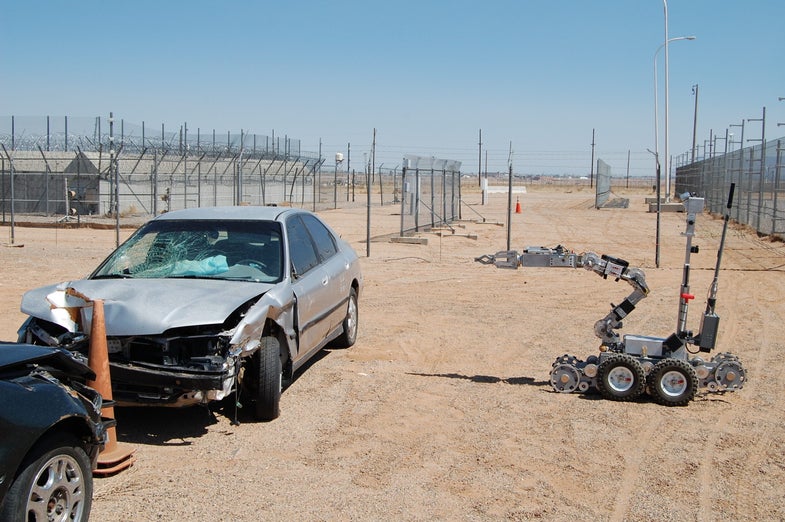 It’s 10 a.m. on a Wednesday, and I’m watching a robot poke a forest camouflage backpack with a stick. Here on the southern edge of Albuquerque, N.M., in an oven-hot tract of desert, a dozen assorted cops, military guys, and national researchers, along with three sweaty journalists, have gathered to play with robots.

Welcome to the Robot Rodeo, an annual competition that is both more and less absurd than it sounds. More absurd because for five days, grown men and women with important jobs (military technician, police officer) use obscenely expensive robots (the machine in the image above costs $100,000) to defuse fake threats (a bombing attempt against the fictional “MIB headquarters,” which may or may not be a nerdulent reference to Men In Black).

Less absurd are the stakes: law enforcement agencies and the military use robots to tackle dangerous situations that might otherwise result in human casualties. But robots are complicated technologies that need to be tested in all sorts of far-fetched scenarios. Defuse a “bomb” out here in the desert, and you’re that much better prepared to address a real bomb threat.

A bomb squad from Doña Ana County, N.M., received this fictional briefing: A car drove up to the MIB headquarters, where a passenger got out and threw a backpack over the fence. The car was found, but the passenger ran away. The driver, now in custody, has warned of a booby trap and larger bomb still in the car. The team has 90 minutes to respond to the threat.

The squad immediately sent their Remotec HD-1 after the package thrown over the fence. Like most of the robots at the rodeo, the HD-1 moves on tracks and has a strong gripping arm topped with a camera.

Because the “MIB headquarters” was actually just a large trailer, the robot faced a tricky problem: the bomb made it beneath the truck, and a low hanging metal crossbeam caught the Remotec’s camera every time its arm tried to move forward and grab the package. So the team got creative. Grabbing a nearby piece of wood, the robot began to poke against the backpack. 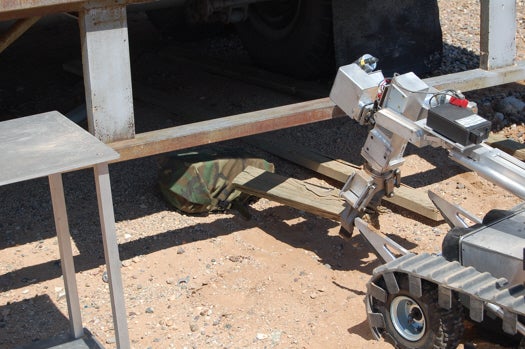 Poke it with a stick!

The Remotec HD-1 solves problems like a cave man.

After trying a few different angles, and a second stick, the robot was able to push the suspicious package out from under the truck. Then it wheeled away from the headquarters, fake bomb dangling in its claw.

The challenge was only half-met. The booby-trapped car was still a threat, and to complicate matters, all its doors were locked. A second robot drove up, the Remotec Andros F6A, which is the larger, older sibling of the stick-manipulating HD-1. (Cool thing about the Andros F6A: it can climb stairs thanks to an extra, narrower set of tracks tucked in close to its body.) The second robot set about the hard and difficult task of opening a car door handle without hands. Or depth perception. The team had just 58 minutes left on the clock.

For 20 minutes, the robot moved back and forth, angling the claw higher and lower, poking the side of the car and scraping the door. The task seemed to require more finesse than the Andros F6A was capable of. (An earlier team attempting this challenge underestimated their robot’s strength, and had accidentally broken off a car door handle in the process.) Finally, after great effort, the claw latched against the door… 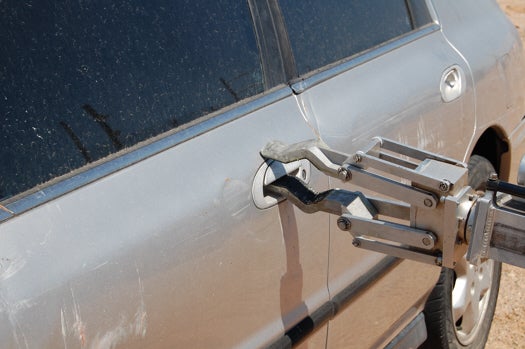 Latched onto the car door handle

…and with delicate effort, opened it! 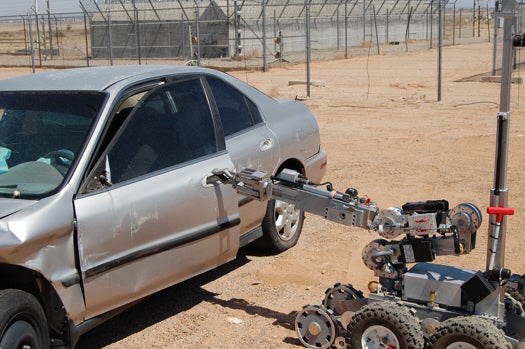 Mission mostly accomplished! With the suspicious package retrieved and the car door open, the Doña Ana County team no longer faced the novel problem of retrieving bombs from difficult places, and instead set about resolving the more routine task (for a bomb squad, anyway) of defusing the mock explosives.

Elsewhere at the Robot Rodeo, a separate mission was underway. Two suspicious packages, again in backpacks, were discovered in the narrow gap between a railing and a fence. The path was hardly wider than a sidewalk. The first bomb was found on the ground and quickly retrieved. The second, however, proved much more challenging. Dangling from the top of a fence, the package was difficult to reach and precarious to move.

Working together, a bomb squad from Farmington, N.M. and the 62nd Explosive Ordnance Disposal Company from Fort Carson, Colo., deployed a combination of military and civilian robots. Farmington sent out a Remotec F6A, and Fort Carson the Talon, a smaller, tracked robot that defused improvised explosive devices in Iraq and helped survey the Fukushima nuclear disaster site in Japan.

This challenge required a special rope-and-pulley operation that, while simple for humans, is incredibly complex for robots. The first part of the task required setting carabiners onto two rail-mounted hooks, so that the pulled rope would drag the package against the far side of the path. Here’s what a robot setting a carabiners looks like: 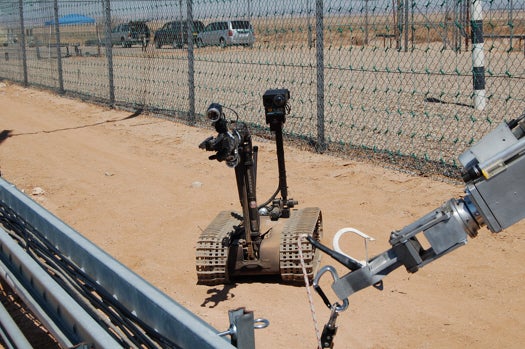 Talon and Remotec set a carabiner

One of the trickier parts of operating these robots is that they each can only look with one camera at a time. In the above image, the Talon is further back, providing larger context and extra visual input for the Remotec as it tries to hook the carabiner on the loop. (It’s like if people only had depth perception when someone else was standing next to them.)

Once the carabiner hooked onto the rail, the next difficult task was placing the proper hook on the backpack itself. Again with the Talon acting as a spotter, the Remotec extended its mechanical arm as high as it could. The package remained just out of reach, but the Remotec had one more trick up its gears. One set of the robot’s tracks scrunched up, lifting the machine an extra six inches off the ground. (Imagine a robot standing on tippy-toes.) That extra height allowed the robot’s arm to latch onto the backpack. 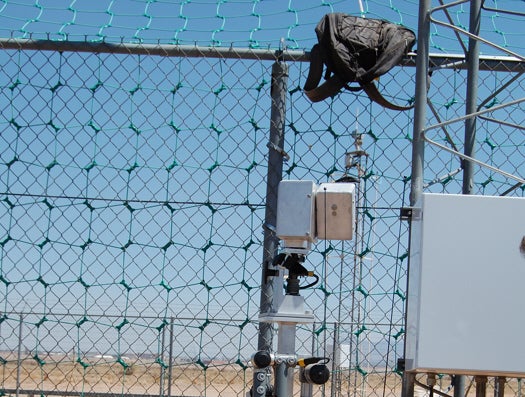 A pull on the rope, and the backpack slipped along the ground, out of the narrow corridor. Getting the package off the fence was only the penultimate step; next, the teams needed to find out what, exactly, was inside. The Talon carried the package into an Open Vision Live Video X-ray system set up under a tent, which, as you might guess, provided live X-ray video of the package’s contents. 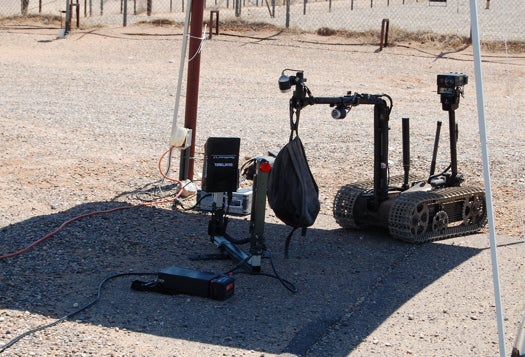 On the ground under the tent is an Open Vision Live Video X-Ray system.

Inside was a cylinder, which the teams labeled a pipe bomb. Challenge complete! The judges, from Sandia and Los Alamos National Labs, asked a few follow-up questions about pipe bomb disposal, and then it was mission accomplished for the two bomb squads.

Next year, the teams and their robots will meet up for another rodeo in Los Alamos, N.M. (I’m crossing my fingers for bomb-disposal drones.) While the competition allows military personnel, police officers, and researchers to test the limits of bomb disposal robots, its greatest benefit lies in teaching the teams to come up with creative solutions in the heat of the moment. Even as the technology improves every year, the robots are still only as good as their human operators.