At South By Southwest, programmer and scientist Stephen Wolfram showed off more of his Wolfram Language software. 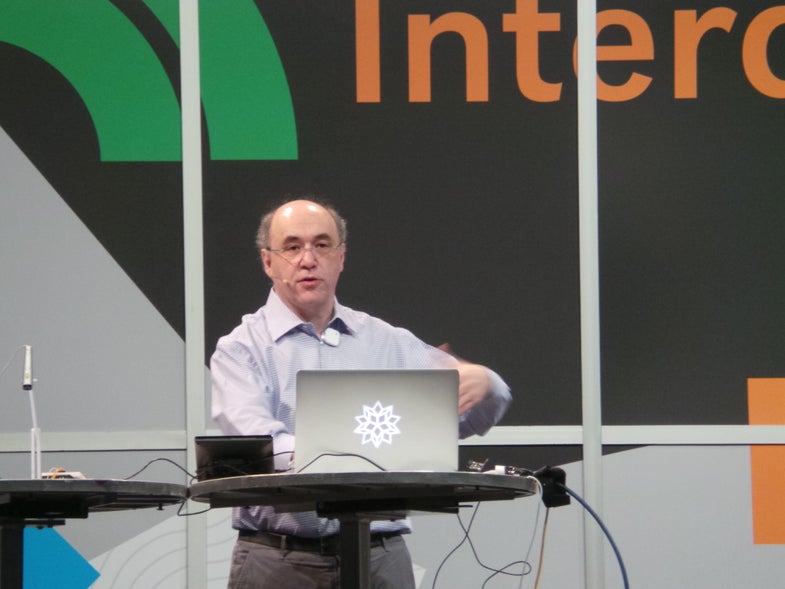 Last month, Stephen Wolfram–scientist, founder of Wolfram Research, and the closest thing Big Data has to a rock star–unveiled Wolfram Language, a “symbolic” computer language more than 25 years in the making.

The system is designed for faster, more intuitive coding** **and loaded with encyclopedic knowledge of the world; its maker promises it to be a more human form of programming by being able to interpret and use images, data scraped from websites, and other less-mathematical information. The response has been both enthusiastic and skeptical. Supporters say it could be an entirely new way of building software, while writer and software engineer David Auerbach at Slate dared to call it snake oil.

At South By Southwest, Wolfram doubled down on his latest work in a series of live demos.

Perhaps you’ve played with Wolfram Alpha, a database for answering factual questions posed like a human would ask them, or the more technical program Wolfram Mathematica, which mathematically plots and analyzes information. Wolfram intends to combine both services into his new system. It’s knowledge-based, he says, with as much baked-in data and commands for wielding that information. Want data from Facebook? You can input a certain phrase like “cats are awesome,” and it’ll know, with a certain probability, what you’d want out of the social netoworking service.

At the talk, Wolfram took a photo of himself and typed some commands to the computer, transforming the selfie into a mosaic of blocks, and then turned that mosaic into a block-pattern video. Why is that function useful? No idea. But it did make for a dynamic demonstration–and gives you a sense of the kinds of processes the language can manage.

Some other jobs it can tackle: figuring out when the sunset is (command: “Sunset [Today]”) and the local temperature (“AirTemperatureData [Here]”). But the linguistic processes are more interesting. Type in “neighbors of Ukraine,” for example, and you get a grid with Ukraine’s bordering nations. If you’re not sure what you want, you can define a goal in the system and it’ll tell you what the best algorithm to complete the goal is. For example, a Wolfram engineer showed me it identifying algorithms to determine which emails are spam, and flagging text as containing profanity.

Wolfram also showed, for the first time, how the system behaves while connected to the Internet. He created an object in the code, and then shipped it off to the cloud as an image. With a couple of such lines of intuitive code, you could make a map of a city, or even ideal travel routes between cities. If you try to map “NYC” to “banana” it’ll tell you, in so many words, “Banana isn’t a city, dummy.” The weirdest example: In about a minute, Wolfram created a web-based generator to translate images into what a dog might see. By applying before-and-after photos of dog-vision to the program, he was able to find random images and have the computer blur and color-alter them into a dog’s-eye-view.

Most impressively, the program created an object in a virtual space (in the dog example, a ball), and Wolfram manipulated it with a simple slider, zooming and crushing and rolling it around. The entire process took about 30 seconds.

His demo wasn’t without hiccups. One awkward moment came when Wolfram drew the numeral eight and asked the computer to recognize it; it decided it was the numeral four.

It’s fascinating, if still a little on the wonky side, and indicative of where computer language is heading. What’s uncertain is how it’ll be used. What doors might Wolfram Language open for programmers, and the people who use their works, that haven’t been opened before? Or will it make software work faster? Perhaps more like we’d want software to work? That’s less clear, and we’ll have to wait until the language is released in the next few weeks to find out for sure.