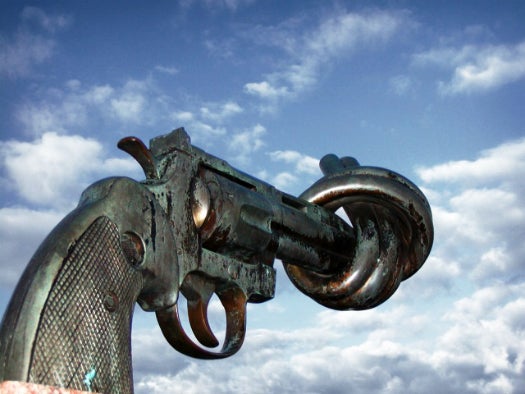 As highly debated as the topic of gun control is in America, there’s almost no research into the causes of gun violence or how to prevent it. Until recently, there was a virtual gag on gun violence research because of a stipulation that federally funded research can’t promote gun control.

Mathematical models are more than just equations–they use statistics and data to describe the way a complex system works, and predict how different variables might effect outcomes. This one provides a model for the full range of possible gun-control scenarios–from the total ban of firearms to the arm everyone approach.

“We’re trying to bring epidemiological approaches to this field of gun violence and violence prevention, so we can predict what strategies are better for preventing death instead of just arguing about it,” says Wodarz, a biologist who studies disease and evolutionary dynamics through mathematical models.

“What is under debate is essentially an epidemiological problem,” he and his co-author and wife, mathematician Natalia Komarova, write in the paper. “How do different gun control strategies affect the rate at which people become killed by attackers, and how can this rate be minimized?” 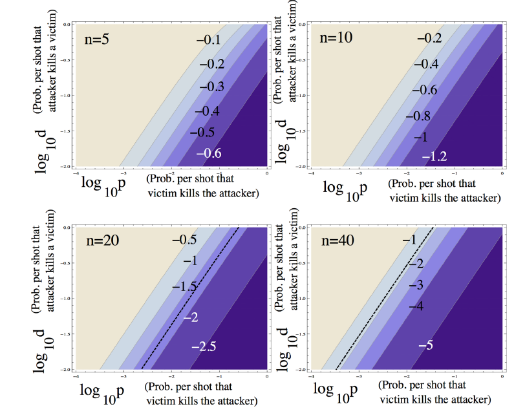 They incorporated variables like the percent of the population that legally owns guns, the fraction of the criminal population that owns guns illegally, and whether you’re more or less likely to die in an attack if you own a gun.

“For instance, if there is no gun control–guns are allowed–what is the percentage of the population that will take up their legal right? How many will actually carry it?” Komarova explains. “This is something that can be estimated.”

Though with the previously published data available, their analysis suggested that a ban of private gun possession or a partial reduction in gun availability might lower the rate of gun-related homicides, this model can’t tell us definitively how gun deaths might be prevented yet. It’s just a preliminary model to how we might approach the debate scientifically, one that can be updated as more statistics become available. “There’s a lack of data in the field,” Komarova says, because of the effective ban on federal funding for this type of research. “One of the purposes of the study was to encourage people to go and study these things.” The researchers liken it to trying to diagnose a disease without having access to things like the patient’s temperature or blood pressure.

The researchers plan to continue their work with the model, possibly incorporating how the controversial Stand Your Ground law–the self-defense law that gives people the right to defend themselves against attackers without the obligation to try to retreat from the altercation–might affect homicide rates.

Any science related to gun violence is bound to be controversial, and though they didn’t need federal funding to carry out this study, the publication process was unusually rigorous here. The researchers had to satisfy the whims of 11 different peer-reviewers before publication (the typical paper only has a couple), something Komarova says has never happened to either of them over the course of publishing hundreds of journal papers.

“We complained to our colleagues and they said, ‘What do you want? It’s a paper about gun control,” she says.