Wind and solar are such promising technologies for the hydrocarbon-free energy sources of tomorrow, but intermittent, inconsistent output renders them... 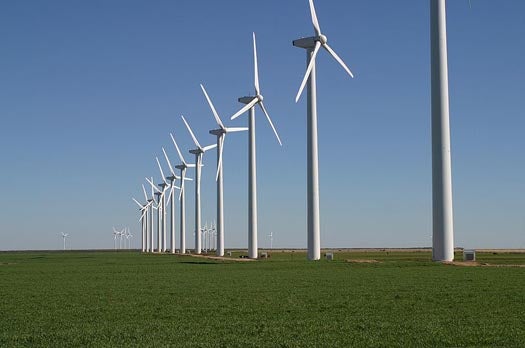 Wind and solar are such promising technologies for the hydrocarbon-free energy sources of tomorrow, but intermittent, inconsistent output renders them unfeasible as anything other than secondary power sources. But UK firm Isentropic thinks it may have solved the problem as it pertains to wind power; all we need to stabilize the energy flow from turbines are giant batteries made out of gravel.

The battery consists of two large silos filled with crushed rock. Electricity generated by the turbine heats and pressurizes argon gas and feeds it into the first silo. The gravel is heated to more than 900 degrees as the hot, pressurized argon passes through, though by the time the argon leaves the chamber it has cooled to ambient temperature.

The argon is then fed into the second silo where it returns to normal atmospheric pressure, initiating a cooling effect that chills the gas and rock to -256 degrees. Thus, the electricity is stored as a temperature difference between the two chambers. If the wind ceases to blow, the process is reversed, feeding the cold gas back into silo number one, powering a generator as it makes the transition back to hot from cold.

The process isn’t a perfect closed energy loop, but Isentropic claims a complete trip through the cycle retains up to 80 percent of the original electricity. Even better, gravel is cheap; the cost per kilowatt-hour falls somewhere between $10 and $55, depending on the costs of other materials. Isentropic also claims the batteries are highly durable; according to the company’s founder, a 164-foot tall silo with an equal diameter would retain half its energy even if left untouched for three years.

All that sounds pretty good, but Isentropic has yet to fully prove out the idea. The vast temperature differences generated by the argon sound quite drastic, and the director of the UK Energy Research Centre points out, gravel isn’t the ideal material to have inside of machine with moving parts. As such, Isentropic is designing a pilot plant that could store 16 megawatt-hours in two silos just 23 feet tall by 23 feet in diameter. That’s enough to cover a pretty big neighborhood during a long, windless stretch. The company is also in talks with an unnamed utility to build a larger demonstration facility.