The U.S. Military May Blanket Afghanistan in Tiny Spy Sensors That Last for Two Decades

During the Cold War, both sides liberally used the “bug”–the remote listening device–to surreptitiously get wind of what the other... 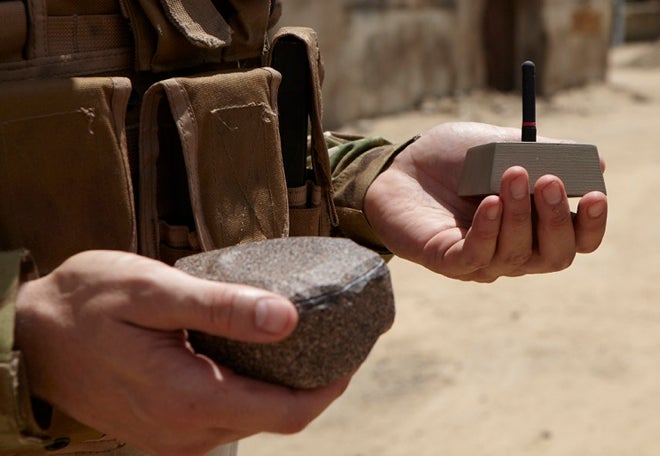 During the Cold War, both sides liberally used the “bug”–the remote listening device–to surreptitiously get wind of what the other side was up to by listening in on a room, a building, or, in the case of East Berlin, an entire city. But in America’s cooling war in Afghanistan, U.S. forces may undertake what could be the biggest bugging operation of all time, planting sensors all over the entire country that could feed the U.S. military intelligence from inside that country for the next two decades. It’s the rough equivalent of bugging an entire country.

The palm-sized devices at the U.S. military’s disposal aren’t listening devices per se, but they would detect anyone moving nearby and report the movement back to an intelligence outpost, letting special operators know when a remote mountain pass or a known smuggling trail is being utilized. Some of the sensors could be buried, others disguised as rocks or other geological artifacts. The point is, they would be littered all across Afghanistan’s landscape, a lingering legacy of a decade-long conflict that would last 20 years more.

These kinds of unattended ground sensors (UGSs) have been used before, notably in Vietnam. But these new sensors–some of which are being developed and tested by a Lockheed Martin–consume a fraction of the power and their batteries are solar-rechargeable, allowing them to operate for up to two decades if Lockheed’s estimates are correct. Other companies are in on UGS game as well, and interest has been spiking in both military circles and elsewhere.

The sensors would be fitted with audio, seismic, or even phased-array radar instruments that could blanket the Afghan countryside in a mesh network of surveillance tech. When a sensor is triggered, these devices would beam the location of the suspect activity to surveillance airships above, spurring them to put more sophisticated electronic eyes on the area.

UGSs like these are already used around bases in Afghanistan and elsewhere, including along the U.S. Mexico border. But the scope of the possible bugging of Afghanistan is truly massive–a testament to what can happen as technologies become ubiquitous and the cost per unit declines. The Lockheed sensor could cost as little as $1,000 per unit, a small price to pay for 20 years of uninterrupted intel, especially for a DoD that always seems to have money to burn. Much more on this over at Danger Room.