How It Works: The Thermal Camera That Found The Boston Bomber

You can't hide from the infrared eye of the law. 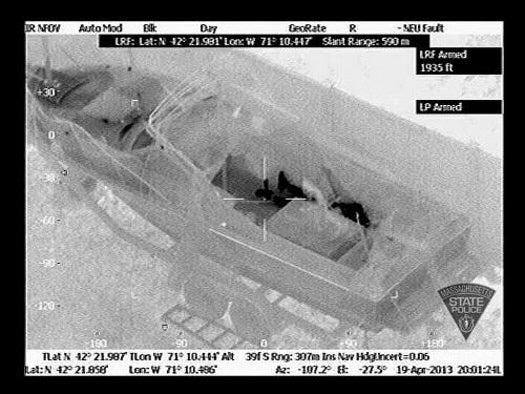 The night before police captured Dzhokar Tsarnaev, a convenience store robbery set off a series of events that included the death of an MIT police officer, a gunfight that ended with the elder Tsarnaev brother dead, and a 20 hour manhunt for the other alleged Boston Marathon bomber. The manhunt was accompanied by a citywide order to “shelter in place” (that is, stay at home and out of harms way) while police conducted a search of Watertown, where it was believed the other bomber was hiding. At 8:15pm on April 19, police cornered a man in a boat.

A Massachusetts State Police helicopter flying over the scene fixed its eyes on the boat, and recorded this thermal video with the Star Safire, a thermal camera system that can cost between $288,000 and $314,000. (Cheaper, less precise thermal cameras are used to check the temperature of cooked meat and look for leaks in plumbing systems.) Mounted on the helicopter, the Star Safire includes a high definition camera, a laser rangefinder, and, importantly, a thermal imaging sensor, which uses infrared light to detect surface temperature. Depending on the way the camera is calibrated, cooler surfaces will show up brighter and warmer surfaces will appear darker, or vice versa. 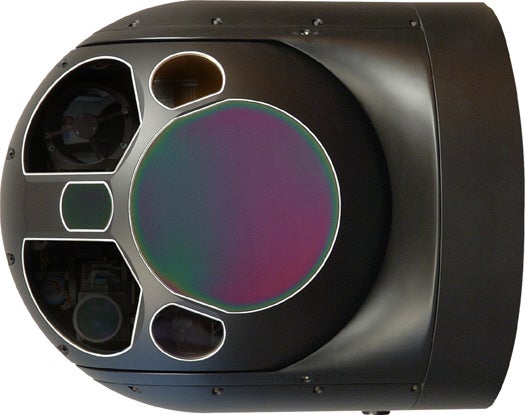 Unlike night vision, which amplifies visible light, thermal imaging operates on the infrared spectrum, which means it’s bound by different constraints that other cameras. It can’t see through windows, for example, and anything that blocks heat blocks thermal images. So how did police see Tsarnaev under the plastic sheeting on the boat? “This plastic was just what we call ‘transmissive enough,’ so some heat was getting through,” says Kevin Tucker, vice president and general manager of the surveillance group at FLIR Systems, the company that makes the Star Safire.

In the helicopter, there is usually a tactical flight operator responsible for managing the system. It’s possible to stream this video down to a command center on the ground, though we don’t know if that was done during the Boston manhunt. If not, the cops in the helicopter can still communicate with their team on the ground.

There has been some debate about the use of thermal imaging in police work. In 2001, the Supreme Court ruled on Kyllo vs United States, in which government agents used a thermal imaging sensor on a house and detected a heat pattern consistent with the high-intensity lamps used to grow marijuana. The agents lacked a warrant, however, and the Supreme Court decided in favor of the defendant.