What we regularly refer to as “night vision goggles” are actually less like goggles and more like heavy, bulky (and... 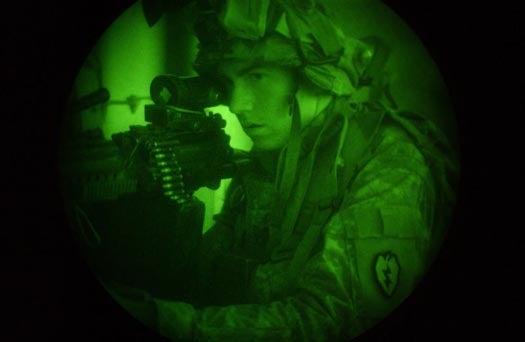 What we regularly refer to as “night vision goggles” are actually less like goggles and more like heavy, bulky (and outrageously expensive) pieces of machinery. But DARPA funded research at the U. of Florida has adapted technology regularly found in flat-screen OLED televisions to create a thin film that turns any infrared signal into visible light, which could integrate cheap night vision tech into car windshields, cell phone cameras and even regular eyeglasses.

Night vision as we know it sucks up a ton of electricity – several thousand volts at a time, according to the lead researcher on the project – to maintain a vacuum within the device.

But thin-film night vision requires no vacuum, instead using a few layers of energy-efficient OLEDs to convert infrared light to the visible spectrum. Seven separate layers of OLEDs detect IR light as it enters, generating a tiny electrical charge. A tiny amount of electricity – just three to five volts – amplifies the signal as it passes through the additional layers.

By the time the image comes out the other end, it’s converted into visible spectrum light, producing a green-lit picture similar to that of existing night vision tech. The difference: a full scale night vision device might weigh less than a quarter of a pound, with the night vision tech only being a few microns thick.

The proof of concept for the technology is only about one square centimeter, but researchers think they could scale the concept to a useable device like a car windshield or cell phone camera within just 18 months. Which means by the time you get around to picking up that iPhone 5G, you might be able to scrap your Flashlight app for a crisp green means of seeing in the dark.