Is The Navy Bringing Back The Autogyro?

It's a drone on a leash. 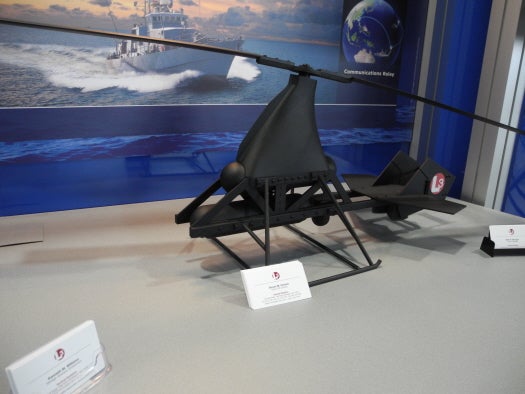 Autogyros are the duck-billed platypuses of the aviation world. They look like helicopters, operate on the same principles as airplanes, and can be pulled like a kite. And if L-3’s new Valkyrie drone is any indication, there’s a chance autogyros might join the U.S. Navy.

First, the principle of the machine: While an autogyro looks most like a helicopter, the rotor is instead unpowered, and provides lift much like the wings of an airplane—by being pulled through the air, in this case by a cable. (Most autogyros throughout history have been powered by onboard engines, which made them look like the awkward offspring of an airplane and a helicopter.)

The Valkyrie drone, on display at the 2013 Sea-Air-Space Expo, can’t fly independently; it’s towed by a ship to act as a 5,000-foot-high eyeball that can look out for other ships, aircraft, or objects on land. The towing cable is not just a tether, but also a secure, unjammable fiberoptics communication line, as well as the power supply for all sensor equipment onboard. A station inside the ship controls the drone.

Clues the U.S. military might start deploying these drones-on-leashes? Well, L-3 (a company that has worked with the Navy in the past) just presented Valkyrie at a Navy trade fair, and the drone should cost just shy of $1 million, making it a very affordable platform by the absurd scale of defense spending.

This isn’t the first time a naval force has turned to autogyros for surveillance. In World War II, German submarines had a sight problem—clinging close to the surface of the water (when not diving beneath it for an attack), they could only spy from just above sea level, which offered a range of vision of about 6-8 miles. A collapsible autogyro that could be stored on board changed this, allowing the U-Boat to tow a spotter high above who could shout back observations to the crew through a telephone he carried. At maximum altitude, the pilot could see 33 miles, or between four and five times as far.