If you happen to hate drones, put the champagne on standby. California lawmakers are in the process of enacting landmark... 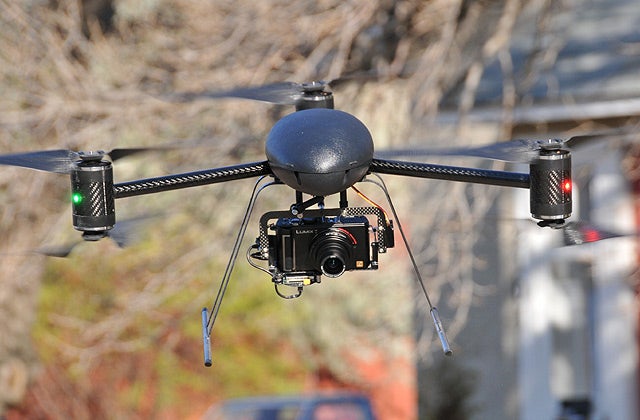 If you happen to hate drones, put the champagne on standby. California lawmakers are in the process of enacting landmark legislation to restrict the use of unmanned aerial systems (UAS) by law enforcement, with promises of similar laws to come for private and commercial systems. AB1327, which cruised through the assembly (59-5) and is now headed to the state senate, would prevent nearly any use of UAS by public safety agencies without a warrant, with an exception made for “hot pursuits,” search and rescue operations, and other emergency situations. Restrictions would also be placed on the footage collected by unmanned aircraft, requiring the majority of it be purged after six months. The long, preemptive national nightmare of persistent robotic surveillance appears to be over.

But the bill continues, and reveals an unmistakable bias on the part of its authors. The law would prohibit a public agency or related party “from equipping or arming an unmanned aircraft system with a weapon or other device that may be carried by or launched from an unmanned aircraft system and that is intended to cause bodily injury or death, or damage to, or the destruction of, real or personal property.”

It’s a beautiful thing, really: The long-awaited marriage of hollow legislative showboating and robophobic fear-mongering. Because, aside from generating untold fist pumps from the anti-drone camp, this particular stipulation would accomplish nothing. The FAA already prohibits the arming of police aircraft. Notice, for example how there aren’t any door gunners hanging machine guns out of LAPD helicopters? Why, then, assume that a flying robot would be exempt from our puny, human laws?

It’s a question that’s central to understanding this legislation, and its potential impact throughout the country. “We don’t required manned aviation to acquire search warrants for their operations,” says Mario Mairena, Senior Government Manager at the Association for Unmanned Vehicle Systems International, a non-profit that promotes the UAS industry. “So why impose this requirement on unmanned aviation? This bill is attempting to rewrite search warrant requirements.”

With rare exception, plain-sight surveillance of a subject, or his or her home, is a warrantless pursuit. Can the police use a telephoto lens to peer into someone’s window from across the street? Absolutely. In fact, the United States Supreme Court ruled in 1989 that a Florida sheriff was within his rights to conduct a helicopter flyover of a suspected marijuana grower’s property without a warrant (though he later obtained a search warrant, having spotted marijuana through missing roof panels).

The legislation’s privacy-related requirements are similarly mystifying, since, as the bill itself references, there are rules currently in place governing the retention of footage from manned law enforcement aircraft. Unless data is being used for an open investigation, police departments dump their aerial footage. And yet, an exception is proposed in this bill, that puts a specific, six-month expiration date on the vast majority of drone-collected imagery.

The only rational explanation for AB1327 isn’t rational at all—that, since drones represent such a quantum leap in surveillance capability, the legislature must take drastic measures to limit their use. Perhaps California’s legislators are big-time science fiction fans, and want to strike an early blow against the inhuman agents of the coming Singularity? What’s clear, though, is that they don’t know how drones work.

Robots, much to my own disappointment, don’t have superpowers. They’re no more or less capable than their manned equivalents. Even if the Predators deployed on lethal missions overseas can seem like omniscient, superhuman assassins, the kinds of UAS that police departments can afford are of the 6 to 10-pound variety, with flight times of some 15 to 90 minutes. They could be useful and cost-effective for targeted surveillance, but quadcopters are short-hop vehicles, and poorly equipped for stakeouts or wholesale data collection.

Of course, there’s the possibility that drones will eventually pose precisely the threat implied by California’s legislature. Ryan Calo, an assist professor at the University of Washington and co-chair American Bar Association Committee on Robotics and Artificial Intelligence, sees the bill as a sensible attempt to get ahead of a potential privacy threat. “Laws aren’t always just about telling us what’s illegal. They can also send a message.” Calo’s only criticism of the legislation is its limited scope—it addresses drone-based footage, while ignoring wider issues of mass surveillance, such as privacy violations that occur after acquiring a warrant, or modes of snooping that don’t specifically involve airborne robots. “Imagine if the day after this law goes into effect, a police chief decides, I’m not going to buy a drone now. But I am going to buy a robot that climbs up buildings and films people,” says Calo.

While it’s inevitable that newer, more advanced robots will be developed, this sort of legislation drifts into strange, sci-fi-inflected waters, establishing boundaries for scenarios long before they’re plausible. It also assumes that, if a perfect breed of spybots suddenly hits the market, lawmakers will be powerless to respond in time. Meanwhile, the NSA seems intent on proving that, whether it means monitoring e-mail traffic or smartphone apps, there are far better and more efficient ways of violatingprivacy than enlisting local cops to field a nationwide flock of eyes in the sky.

And yet, as you may have heard, robots are creepy. “Politicians are using this to scare the American public,” says Mairena, who believes that California risks alienating the burgeoning UAS industry, and losing some 18,000 jobs state-wide and $82M in related tax revenue over the next decade or so. Personally, I’m positive the bill is going to pass, and inspire similar legislation around the country. Fear tends to expand, not contract. If there’s any doubt that California’s proposed drone law is based on something more concrete or defensible than a vague panic over evil robots and their evil ways, remember AB1327’s crucial weapons ban. The state of California is firmly opposed to mounting guns on drones flying in U.S. airspace. Just like the FAA, and all non-insane persons in America. Disarming police drones that were never going to be armed in the first place is the kind of empty gesture every human get behind.