FYI: Is It Legal To 3-D Print A Handgun?

The backers of the Wiki Weapons Project want to create a free, opensource digital file for printing a working handgun at home. But can they do so legally? 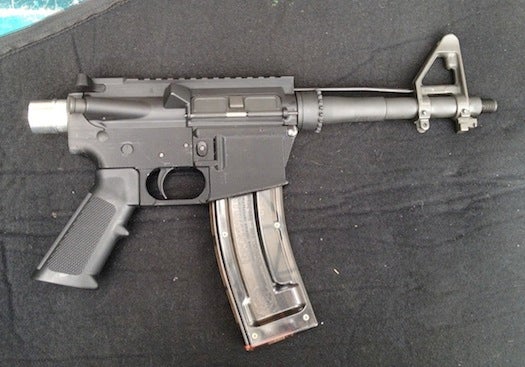 Earlier this week, the Wiki Weapons Project–an initiative to create a 3-D printed handgun and distribute the digital design file for free online–ran into a stumbling block when 3-D printer provider Stratasys pulled the lease on a printer it had provided the group. Stratasys cited a clause in the lease agreement that allows the company to rescind a lease for printers believed to be used for unlawful purposes. That raises the obvious (and thorny) question: Is the Wiki Weapons Project doing anything illegal?

We at PopSci are experts on many things, but federal firearms regulations and intellectual property law are not among them. As we understand it, one is required to obtain a federal firearms manufacturing license to produce firearms in this country–if those firearms are for sale. The Wiki Weapons Project has demonstrated no intention to sell any potential firearm it creates, but rather to create a freely distributed digital file that would allow anyone with the right hardware and know-how to print their own firearm.

And the law doesn’t have much to say about that, not explicitly, anyway. Regardless of your personal feelings toward the Wiki Weapons Project, it is at the very least forcing us to take a look at what happens in a world where information (which wants to be free) can be easily converted into physical objects–many of which (like firearms) are not supposed to flow freely.

“You have an Anarchist’s Cookbook kind of question. Just information is generally pretty hard to make illegal. It’s just information.”

“This raises lots of interesting questions,” says Michael Weinberg, a staff attorney at Public Knowledge, a legal consortium focused on digital technology, the internet and intellectual property. “There are going to be a lot of stories in the future about people doing interesting things and uninteresting things with 3-D printing. The question people need to ask themselves is: was this possible before 3-D printing? And if so, did the use of a 3-D printer fundamentally change the nature of it. For this, it seems to me that the answer is no.”

That’s a common sentiment among the experts we talked to.

“With traditional machine tools, one is already capable of manufacturing one’s own firearms,” says Christopher Walsh, clinical instructional fellow at Harvard’s Berkman Center for Internet and Society. “Although I am not an expert on gun control laws, I would be very surprised if existing regulations did not already account for home manufacture of firearms. Also, for the time being, it takes far less money, effort, and expertise to simply buy a firearm on the black market than to 3-D print one.”

So the idea that there’s no legal framework in place to govern the 3-D printing of guns isn’t really accurate. Whatever laws govern the making of firearms at home by means other than 3-D printing should also regulate whatever the Wiki Weapons Project cooks up (assuming they can locate another 3-D printer). Of course, there are considerations beyond the strictly legal.

“From my perspective, this really doesn’t raise novel questions of intellectual property rights, but common sense and potential civil and criminal liabilities,” says Michael Powell, an intellectual property attorney in the Atlanta office of Baker Donelson. “What ‘defense’ is this group really trying to achieve that couldn’t be achieved using a legal purchased firearm, or even a Taser, a can of pepper spray or mace, or other personal protection device?”

Wiki Weapons Project leader Cody Wilson, a University of Texas Law Student himself, claims the project is about “collapsing the distinction between digital information and material goods” and a “statement to these international kleptocrats that this isn’t in your control anymore.” Less inflammatory, perhaps, is Wilson’s assertion that 3-D printing is a technology whose time has come. So if the Wiki Weapons Project isn’t, strictly speaking, illegal under the current legal framework, what does this mean for the future of free information in a world where data can quickly become a physical object? How could something like this influence the future of intellectual property law? And is Wiki Weapons, by pushing this idea of freedom of information in such a controversial way, undermining its own ideals?

“These files aren’t guns,” Weinberg says. “You have an Anarchist’s Cookbook kind of question. Just information is generally pretty hard to make illegal. It’s just information. So the fact that you can now get this file and it can tell you how to produce a gun is very similar to a recipe online that tells you how to build a bomb or something like that. Just because a Web site tells you how to do something like that doesn’t make the Web site illegal.”

At least not yet. At some point in the future it could be, depending on how legislatures decide to deal with perceived threats to law and order. And hopefully, Weinberg says, they won’t deal with this technology by overreacting.

“Technology is ahead of the law in a lot of ways,” Weinberg says. “One of the things I tell policy makers a lot is that when you have a new technology where it’s not clear how it’s going to be used or how it’s going to be adopted, the worst things you can do is imagine the most dystopian future you can possibly imagine and then try to regulate to prevent that dystopian future. For two reasons: One, because that dystopian future is never going to happen, so on one level you’ve wasted your time. But the most pernicious thing is that what you inevitably do is you outlaw things that could’ve been very productive and useful, things that you weren’t smart enough to think of at the time. So not only are you not preventing this dystopia, but you are actively preventing positive outcomes.”

“It is an area that will raise many new questions,” he says. “But the hope is that we will not overreact and sacrifice either the positive potential of this new technology or Constitutional protections.”

Ask Us Anything
Military
Weapons
materials