Video: DARPA Device Puts Out a Fire With Blast of Sound

Applying physics to put out a fire, as opposed to chemistry, is an idea DARPA has been eyeing for a... 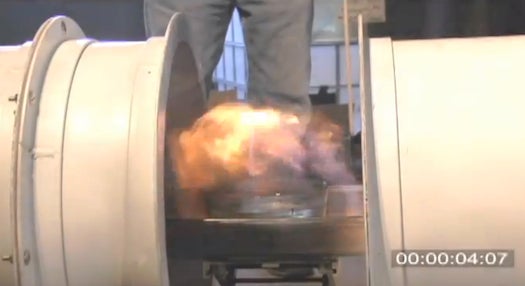 Applying physics to put out a fire, as opposed to chemistry, is an idea DARPA has been eyeing for a while, and it might lead to military devices that can better snuff out fires in enclosed places. Now they have demonstrated a new device in action.

In the video, two speakers are placed on either side of a fuel source. The sound increases air velocity, which disrupts the flame. It also causes higher fuel vaporization, which increases the flame’s area while dropping its temperature. That thinning causes a problem in the combustion process.

It looks like an interesting project, but even DARPA admits they aren’t sure how they’ll use it. To make it worthwhile, it would have to operate on a much larger scale. They’re hoping instead that the project will inspire other ideas in the field, so soak in the video in case it’s the last you see of the technique.