Soft, bendy robots could have a wide variety of benefits, from squishing into tight spaces to conduct surveillance, to crawling... 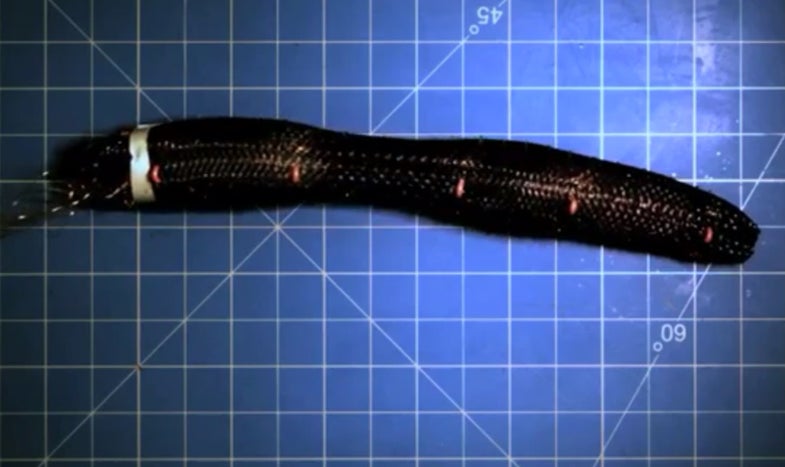 Soft, bendy robots could have a wide variety of benefits, from squishing into tight spaces to conduct surveillance, to crawling through a person’s body to deliver drugs or take medical images. But it’s hard to build entirely soft objects containing soft bodies, soft batteries and soft motors. A new version developed at MIT and Harvard is both soft and tough, inching around like an earthworm yet surviving multiple cruel blows from a rubber mallet.

The robot is nicknamed “Meshworm,” after the earthworms that inspired its design. Rather than using liquid, air or silicone gears to get around, like other soft robots we’ve seen, Meshbot uses artificial muscle made from a shape-memory alloy. It looks very much like a squiggling worm, as you can see in the video below.

Researchers led by MIT mechanical engineering professor Sangbae Kim took a flexible mesh tube and encircled it in wires out of titanium and nickel, an alloy that contracts and expands with heat. They separated the wire into segments, much like those found in an earthworm, and applied a current to heat some of the segments. This made Meshworm’s soft body squeeze together sections at a time, which caused it to inch along a surface. This type of locomotion is called peristalsis, and it’s the same action used by snails, cucumbers and our own gastrointestinal tracts (to move food into our stomachs).

The best part may be the robot’s durability. There are no pneumatic pumps, rigid gears or batteries to break, so the robot can survive all kinds of assaults. This could make it useful for military applications — DARPA funded this research. Kim and colleagues subjected the robot to a battery of tests to see how it held up, including smashing it with a mallet and stepping on it.

“You can throw it, and it won’t collapse,” Kim says. “Most mechanical parts are rigid and fragile at small scale, but the parts in Meshworms are all fibrous and flexible. The muscles are soft, and the body is soft … we’re starting to show some body-morphing capability.”

The team recently published details of the design in the journal IEEE/ASME Transactions on Mechatronics. 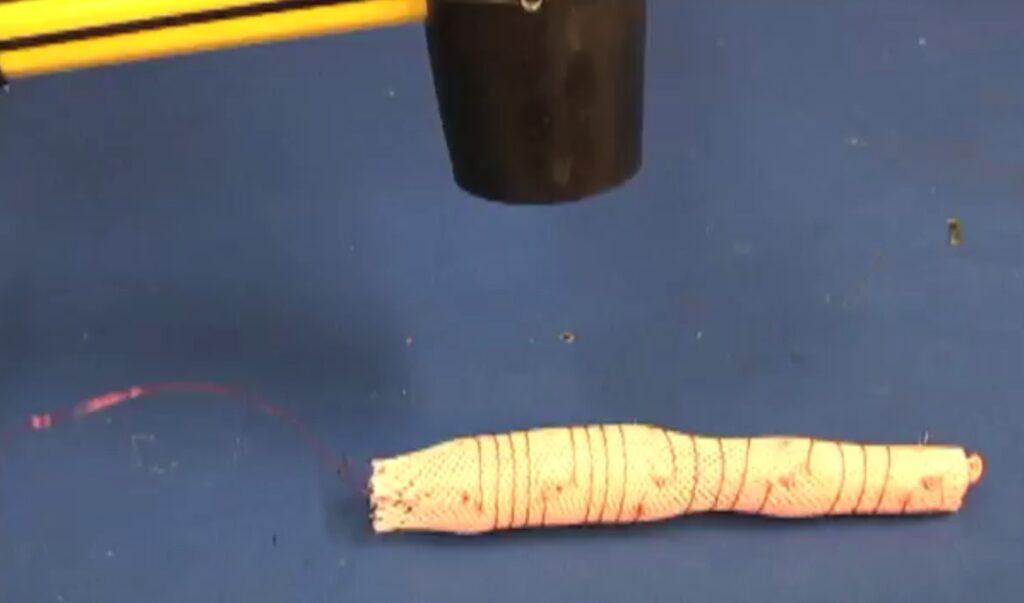 MIT researchers who designed the soft, flexible inchworm-bot tested its mettle by pounding it with this mallet and by stepping on it. The robot survived intact and kept inching away.