Not content to let scientists figure out how to engineer animals and plants depending on the situation, DARPA wants to... 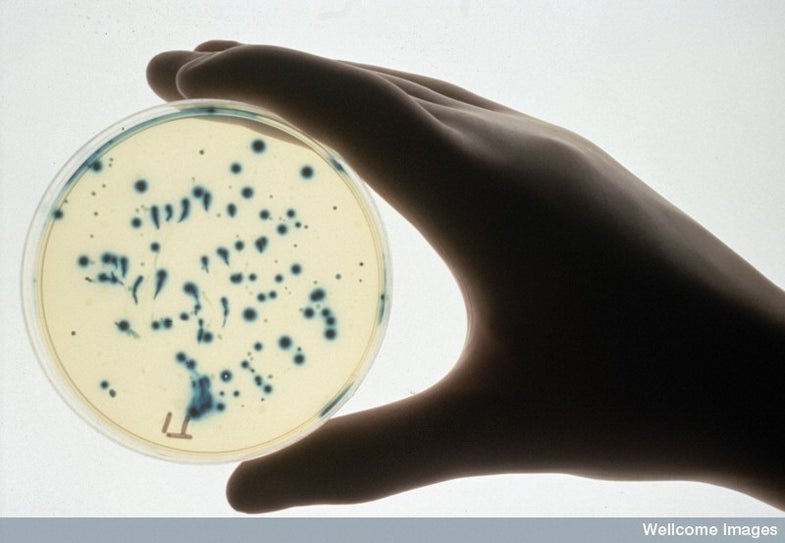 B0002430 Hand holding petri dish of recombinant organisms Credit: Audio Visual, LSHTM. Wellcome Images images@wellcome.ac.uk http://images.wellcome.ac.uk Hand wearing a latex glove and holding a petri dish of E. coli. The blue colour allows easy selection of recombinant plasmids. The blue colonies contain the parental plasmid which has a gene for the beta- galactosidase protein incorporated into it. This converts a substrate to the blue dye. If an extra piece of DNA is inserted into the plasmid (a recombinant plasmid) this enzyme is disrupted and no blue dye is produed and the colony appears white. Published: - Copyrighted work available under Creative Commons by-nc-nd 2.0 UK, see http://images.wellcome.ac.uk/indexplus/page/Prices.html. Wellcome Images
SHARE

Not content to let scientists figure out how to engineer animals and plants depending on the situation, DARPA wants to generalize the process, creating a manufacturing framework for all living things. The “Living Foundries” program sets up an assembly line paradigm for life and its constituent parts, and the DOD’s crazy-science arm just handed out its first research grants.

Among the recipients are Caltech, MIT and the J. Craig Venter Institute, a fitting result given the latter group’s prior success in creating the first-ever synthetic organism. The full suite of awards was announced May 22, comprising $15.5 million spread among six companies and institutions.

DARPA announced Living Foundries last summer, with a goal toward an engineering framework that could apply to any living thing. Under this program, genetic engineering would no longer be limited to modification of existing organisms — instead, scientists would be able to concoct anything they wanted from scratch, using a suite of ingredients and processes that could apply in any situation. Such a system is better, DARPA argues, than already promising examples of synthetic biology, which are too laborious, lab-specific and expensive to be universally applicable.

In the beginning, Living Foundries creates a basic library of modularized parts that can be assembled in infinite variations. Like computers borne of circuits and wires, endless forms of life could arise from a brew of proteins and DNA — perhaps bacteria that could eat cancer, maybe renewable fuels, and so on. The ultimate goal is a genetic starter set that could be snapped together like so many Legos, forming any system the military might require.

The contract winners will have to come up with this library of parts, as well as a way to test the new bio-products, Danger Room reports. DARPA also wants the teams to compress the biological build, test and design cycle by 10-fold, in both time and cost.

It may not be far-fetched — synthetic biology is already trending toward greater efficiency, both in the engineered organisms themselves and in the tools scientists are using to develop and evaluate them. As one example, consider the cost of genome sequencing now to the Human Genome Project’s gargantuan price tag. If the charter members of Living Foundries are successful, bio-engineering will become as efficient as factory production.