Testing how objects act in microgravity is not limited to astronauts on the space station. On Earth, you could do... 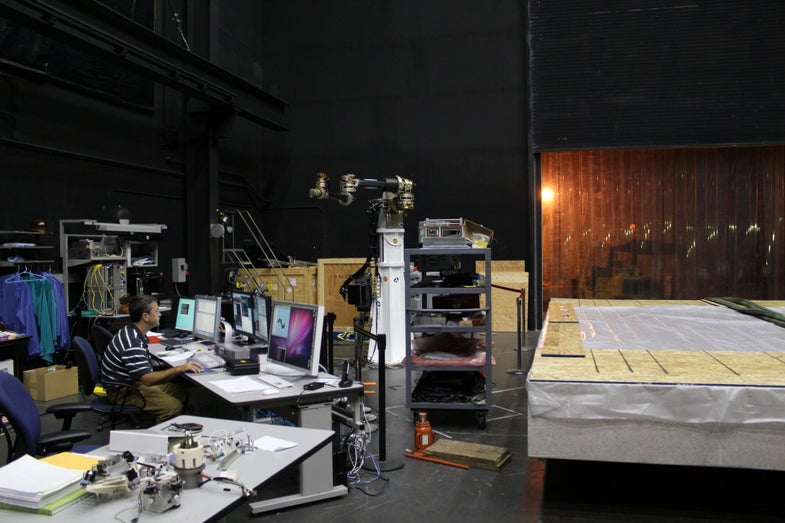 Precision honed to within +/-0.0018 inches tolerance across its surface, the Gravity Offset Table (shown right) will allow scientists to emulate the inertia of space in the laboratory using full-size spacecraft and robotic arms like the Front-End Robotic Enabling Near-Term Demonstration (FREND) arm pictured center.
SHARE

Testing how objects act in microgravity is not limited to astronauts on the space station. On Earth, you could do it with the world’s largest air hockey table, made from a gigantic slab of rock.

The Navy just got a new 75,000-pound slab of granite, honed to near perfection at just plus or minus 0.0018 inches of irregularity across its entire 300-square-foot surface. The slab, quarried in California, is thought to be the world’s largest single-slab granite table.

It will help scientists emulate the motion of objects in space, which they’ll do by floating objects on air above its frictionless surface — similar to how an air hockey table works. “Based on the inertia of the ‘floating’ system, a realistic spacecraft response can be measured when testing thrusters, attitude control algorithms, and responses to contact with other objects,” explains Dr. Gregory P. Scott, space robotics scientist at the U.S. Naval Research Laboratory. Without a system like this, engineers would have no way to test the classical mechanics of objects in space — not without going to space itself.

One goal is to figure out how to capture and dock with free-floating spacecraft. Satellites and other spacecraft that are meant to be captured and retrieved — like the Hubble Space Telescope, for instance — have specific docking and capture systems, but most satellites don’t. But it is cheaper (and better for the burgeoning space junk problem) to capture and service an ailing satellite rather than launching a replacement. This new slab will help NRL study ways to do that, with better precision than any other space robotics facility.