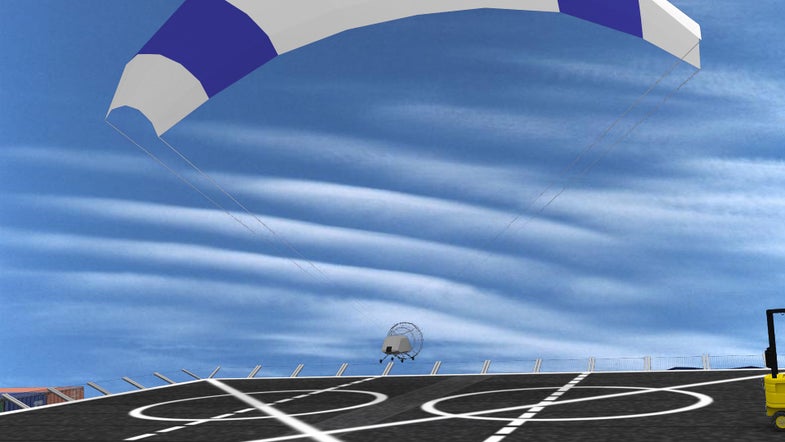 When disaster strikes and a humanitarian crisis unfolds, international aid generally arrives via naval ships–often the very same military vessels designed to put troops and materiel ashore during military conflicts. That works okay, but it involves pulling naval vessels off their primary security missions and then moving them to where they can help, which can take days. To help get aid to the places its needed faster without bothering the Navy, Raytheon has designed a modular approach for quickly outfitting commercial container ships with an array of advanced technologies designed to move humanitarian cargo ashore to the places its needed most, no seaport necessary.

Commercial container ships moving standardized shipping containers aren’t optimized for humanitarian missions either. They require port facilities and massive cranes to move their cargo from ship to shore–cargo that is then transferred to trucks or railways for an overland journey. But during humanitarian disasters–take the 2010 earthquake in Haiti or the Indian Ocean tsunami in 2004, for instance–port facilities may be damaged and roads and railways may be washed out or otherwise rendered impassable. That’s if there’s even a deepwater port in the most affected regions. The challenges of moving aid from ship to shore and from shore inland can be greatly compounded.

Under DARPA’s TEMP program (that’s Tactically Expandable Maritime Platform), Raytheon has addressed these problems by creating an all-in-one solution for turning the closest available container ships into floating humanitarian mission centers employing everything from unmanned cranes to UAVs to quickly transport aid to where it’s most needed without docking at a seaport or relying on terrestrial transportation.

First, it designed a mission management module that can store easily inside a shipping container for use on board the ship. From here, aid workers can coordinate their missions and control various other TEMP technologies–technologies like the ParaFoil Air Delivery System, an unmanned powered paraglider that can ferry 3,000-pound pallets from the deck of the ship across the water to sites onshore. With multiple ParaFoils deployed as an “air bridge,” Raytheon says it can move 125,000 pounds per day inland, as the individual UAVs can travel up to 75 miles without refueling.

To ensure that the chain of cargo flowing from an offshore container ship to the people who need it ashore remains unbroken, Raytheon has also designed a modular, motion-stabilized crane that breaks down to fit inside a standard shipping container and can be quickly deployed on the ship to move fully loaded shipping containers around on deck. These cranes can be used to move containers onboard the ship or to lift them overboard and place them on smaller boats that can ferry them ashore.

The idea here is that humanitarian workers or aid groups could quickly (it takes less than a day to outfit a container ship) convert readily available commercial vessels into floating aid stations that can simply pull up to a coastline and start offloading supplies, bypassing the logistical nightmares often inherent in disaster situations. That should save time and lives–and help to keep the Navy on task.