Video: Affordable Robot Hand Made with Cellphone Parts Can Replace Its Own Fingers

The human hand is incredibly complex, and no matter how many attempts we see to replicate it (lots of attempts),... 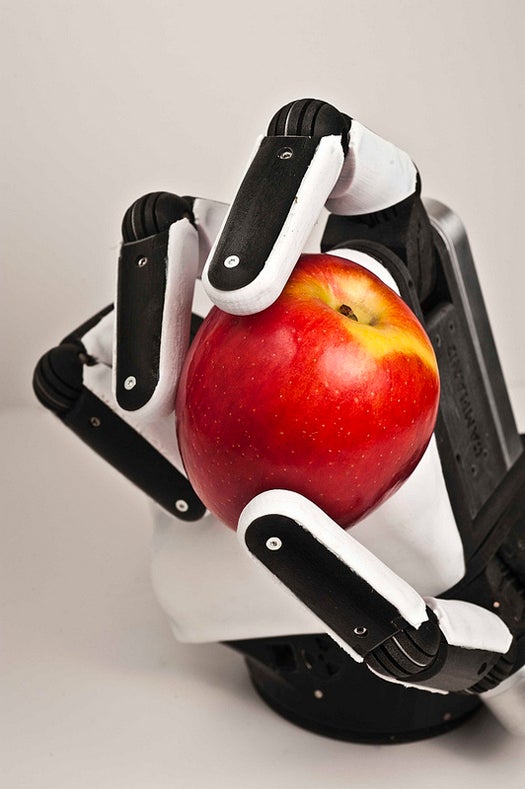 The human hand is incredibly complex, and no matter how many attempts we see to replicate it (lots of attempts), none seem to get it perfectly right. So a DARPA-funded project is throwing the idea of completely mimicking it out the window and going with an impressive four-fingered plastic machine that can move objects, replace the batteries in a flashlight, and even help detect IEDs.

The Sandia Hand is meant to be a relatively affordable, still-dextrous alternative to the current crop of robotic hands. It costs $10,000, compared to up to $250,000 for a similar high-end hand; is made of plastic; and is mostly produced with parts found in cellphones. The digits attach to the palm through magnets, so they can be easily switched out, or can detach when the hand gets rocked too hard. (Something fun besides the standard fingers, like, say, screwdrivers, could also be attached.) It can even retrieve its digits and reattach them on its own.

That durability makes sense, since the hand might be enlisted overseas as an IED-disabling device. Right now, there’s a simple way to disarm IEDs: run something into them. That works, but a hand like this could provide the finesse a bomb diffuser would need to stop a threat without the bang.