Bio-Retina Implant Could Give Laser-Powered Sight to the Blind 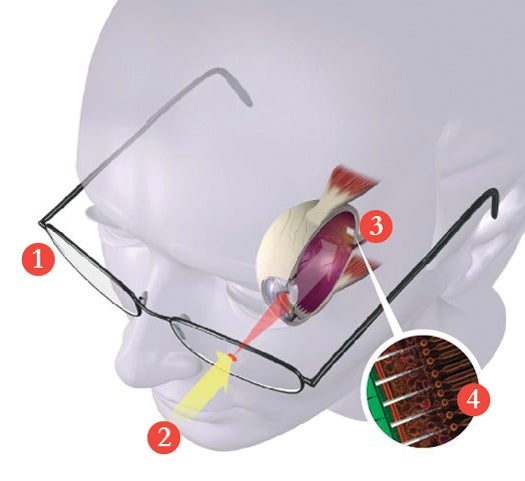 A new bionic eye implant could allow blind people to recognize faces, watch TV and even read. Nano Retina’s Bio-Retina is one of two recent attempts to help patients with age-related macular degeneration, which affects 1.5 million people in the U.S.

Although a similar implant, Second Sight‘s Argus II, has been on the market in Europe since last year, it requires a four-hour operation under full anesthesia because it includes an antenna to receive power and images from an external apparatus. The Bio-Retina implant is smaller because it doesn’t have an antenna. Instead, the implant captures images directly in the eye, and a laser powers the implant remotely. Because of Bio-Retina’s compact size, an ophthalmologist can insert it through a small incision in the eye in 30 minutes—potentially more appropriate for seniors. The Bio-Retina will generate a 576-pixel grayscale image. And clinical trials could begin as soon as next year.

Ordinary-looking glasses contain a battery, a power-delivering laser apparatus and working lenses (to help with vision problems such as nearsightedness and astigmatism).

The near-infrared laser beam, gentle enough to shine harmlessly through the eye onto the implant, provides up to three milliwatts of power to a photovoltaic cell on the eye implant. The light is invisible, so it won’t interfere with sight.

Photoreceptors pass light information to an image processor that translates each image pixel into a series of electrical pulses that represent a particular shade of gray.

(Inset) Six hundred needle electrodes (wrapped in biocompatible silicon and sapphire to prevent the formation of scar tissue) penetrate the retina. Each electrode represents one pixel, sending pulses of electricity to stimulate the eye’s neurons, which transmit the image to the brain.