PopSci’s favorite autonomous warplane is having a big week at Naval Air Station Patuxent River. The first of the two... 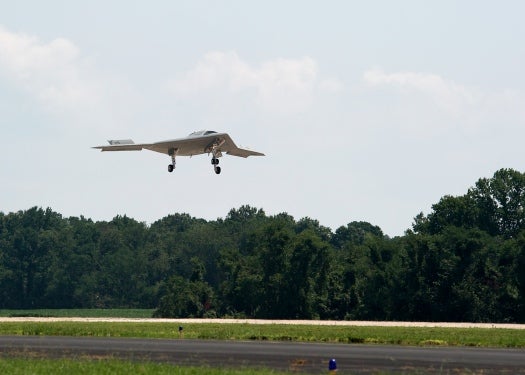 PopSci’s favorite autonomous warplane is having a big week at Naval Air Station Patuxent River. The first of the two aircraft has been reassembled, run through a battery of tests, and is officially back in the air, this time on the East Coast.

On Sunday the X-47B made a 36-minute flight, looping over the Chesapeake Bay at altitudes up to 7,500 feet–appropriately with the Navy’s carrier-capable workhorse, an F/A-18 jet, giving chase. The X-47B is the Navy’s (and the world’s) first attempt at creating an unmanned jet aircraft that can take off and land on a carrier deck–if successful, it will also be the first tailless aircraft to do so. Pax River held a media event yesterday to celebrate the first flight, which brings us one big step closer to the advent of the first unmanned, autonomous, aircraft carrier-capable strike aircraft.

Unlike the initial flight tests at Edwards Air Force Base in California, this first flight at NAS Pax River demonstrates that the X-47B has been successfully folded into the Navy’s command and control framework, which has been designed to mimic that of an aircraft carrier. Pax River is home to one of the world’s only terrestrial carrier simulators–a runway fitted with arresting cables for carrier-style landings and a steam catapult for high-speed launches. From a facility at Pax that simulates the air traffic control center and primary flight control tower on real carriers, the Unmanned Combat Air System team will spend the rest of this year getting the X-47B ready for real carrier tests, slated for sometime in the first half of 2013, pending the availability of a carrier on the East Coast.

While the X-47B itself is not intended for active duty, the UCAS program that created it will provide operational guidance and demonstrate technologies for a follow-on program (currently termed UCLASS) that aims to put operational unmanned strike jets on carrier decks by the end of the decade.