Over at Picatinny Arsenal, the research and development facility and proving ground for the U.S. Army’s weaponry, engineers are developing... 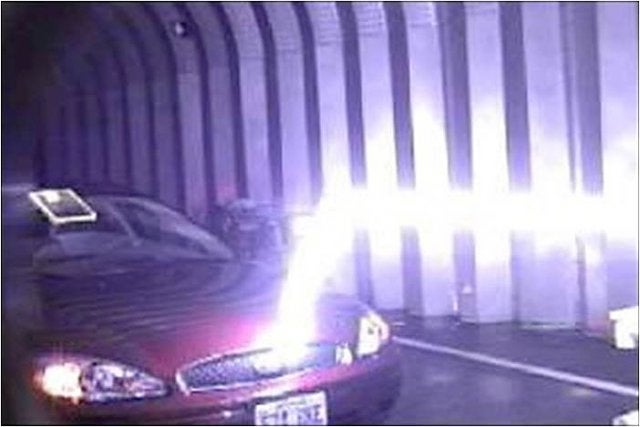 Over at Picatinny Arsenal, the research and development facility and proving ground for the U.S. Army’s weaponry, engineers are developing a device that shoots lighting bolts along a laser beam to annihilate its target. That’s right: lighting bolts shot down laser beams. This story could easily end right here and still be the coolest thing we’ve written today, but for the scientifically curious we’ll continue.

The Laser-Induced Plasma Channel (LIPC) can be used to destroy anything that conducts electricity better than the air or ground surrounding it (unexploded ordnance seems a good candidate here). It works off of some pretty basic principles of physics, using a laser to carve an electromagnetic path through the air that accommodates a high-voltage beam. Create that path, crank up the voltage, and your target is toast.

It works like this: a high intensity, super-short duration (maybe two-trillionths of a second) laser pulse will actually use air like lens–surrounding air focuses the beam, keeping the laser pulse nice and tight rather than scattering it. If the pulse is strong enough, it actually creates an electromagnetic field around itself that’s so powerful it strips electrons from air molecules, essentially creating a channel of plasma through the air. Since air is composed of neutral particles (that act as insulators) and the plasma channel is a good conductor (relative to the un-ionized air around it) the path of the laser beam becomes a kind of filament.

Of course, the LIPC requires a lot of hardware, like a laser capable of really short pulses and a power source to provide both laser and lightning. In other words, it’s not very practical (as with most laser weapons, it suffers comparatively from the fact that bullets fly straight, have a long shelf life, are easy to carry, and are really cheap). But a laser-guided lightning weapon? It doesn’t have to be practical to be amazing.