On Friday, a single mysterious program was responsible for 4 percent of all stock quote traffic and sucked up 10 percent of the NASDAQ's trading bandwidth. Then it disappeared. 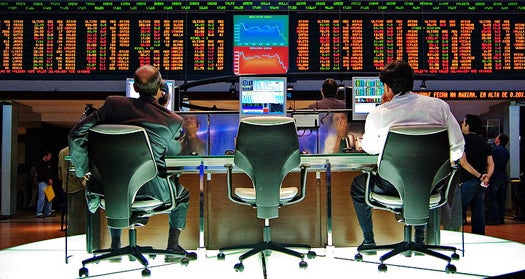 In markets, as in war and medical research and just about everything else, technology tends to impart an advantage. And, as we’ve recently seen with concepts for 3-D printed handguns, the rate of technological innovation often far outpaces the law’s ability to address potentially dangerous developments. This is how a single computer program of mysterious origins managed to make up 4 percent of all quote traffic in the U.S. stock market last week while hoarding 10 percent of the bandwidth allowed for trading on any given day.

That’s scary. No one knows where the program came from, what it’s really doing, or why it failed to actually execute a single trade–though there are plenty of theories. None of which is comforting. Scarier still: This kind of thing most certainly happens more often than we realize, and it happens without any kind of oversight. The global financial markets that underpin our economies are essentially run by programs that function faster than any human, neither the program’s creator nor any government regulator, could possibly intervene to halt an impending disaster (remember the “flash crash” of 2010?). We often joke about the machines taking over, but in the financial markets we’ve already created that reality.

We’ve previously covered all kinds of technological trading shenanigans aimed at giving one trading house an edge over its competition and the rest of the market. Fiber optic companies have laid down new shorter optical cables aimed at shaving milliseconds off of transactions taking place between London and New York or New York and Chicago (one Harvard professor even wrote a paper examining which geographic locations are best suited to leverage the speed of light into millisecond trading advantages as quotes and trades bounce around global fiber networks). Rogue algorithms have made trading errors or overwhelmed trading systems, sending markets soaring or diving. We’ve even see algorithms designed to trick other algorithms and trading robots that make decisions based on superstition.

The point of all this algorithmic manipulation is generally to create an edge for high frequency traders–those that execute huge orders in rapid succession, making (or losing) huge sums of money via small changes in an instrument’s price, often repeating this over and over during a given day. High frequency traders can make money the old fashioned way, by watching a stock go up and down and buying or selling when it moves to a predetermined value. But they can also take advantage of latencies in the fiber optic networks and other computerized systems that conduct trading. If a program can get price information faster than other programs–and we’re talking fractions of a second here–they can make advantageous trades based purely on the flow of information, with no regard for the value of the underlying financial instrument.

That’s likely what we’re looking at here. The behavior of this particular program was picked up by market monitor Nanex, whose own algorithms mine trading data for anomalies. In this case, the program began placing orders early last week involving 500 stocks on the NASDAQ (the technology index, of course) in rapid-fire, 25-millisecond bursts–first 200 quotes, then 400, then more and more, repeating itself. But it canceled those orders just as quickly, never actually completing a trade. At 10:30 a.m. eastern time on Friday, the program vanished.

This algorithm was likely just testing the water. Whoever created it likely just added some bandwidth and the program was seeing exactly how well it could use that additional bandwidth to create an advantage. How? Generally these programs dive into the market, suck up bandwidth, and try to slow the machinery of the market computers that feed information to others in the market. Then, using servers co-located at the exchanges themselves, the program can buy and sell on information that its competitors won’t receive until a few fractions of a second later. Advantage goes to the algorithm that can best sabotage the rest of the market.

Regulators are looking into this kind of market manipulation of course, but they are woefully behind. This kind of trading accounts for 70 percent of what happens in the markets every day. The real fear: a huge news event or a market sell-off occurring while one of these programs is choking up the system by eating up some double-digit percentage of an exchange’s bandwidth. The exchanges themselves aren’t even monitoring for this kind of activity (it’s not illegal, so they are not compelled to). Yet a glitch, or a single error buried in the code, could set off a serious market disaster.