Robots, nanotechnology and other manufacturing of the future can reposition the U.S. as a global technology leader and revitalize the... 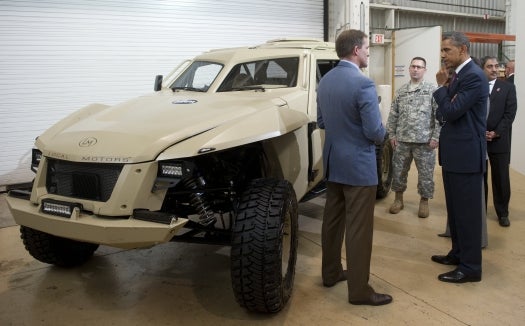 Robots, nanotechnology and other manufacturing of the future can reposition the U.S. as a global technology leader and revitalize the nation’s flagging economy, President Obama said Friday morning. In a visit to Carnegie Mellon University, Obama announced a $500 million investment in advanced technologies, including $70 million for a national robotics initiative.

A new Advanced Manufacturing Partnership will bring together six universities, including CMU and MIT, and 11 manufacturing firms, including Ford Motor Co. and Northrop Grumman, to develop new technologies. A National Robotics Initiative and a Materials Genome Initiative will spur new, rapid advances in fields from medicine to consumer gadgets, Obama said.

Obama toured CMU’s Robotics Institute, where researchers are working on projects like autonomous flying car technology. He also met with a local robotics firm that produces robots that can explore water and sewer pipes, capturing video for municipal workers and transmitting information to a central city database.

“They can enhance the productivity of these workers by three- or four-fold. Potentially this can save cities millions in infrastructure costs,” Obama said.

“One of my jobs as commander-in-chief is to keep an eye on robots. I’m pleased to report that the robots you manufacture here seem peaceful, at least for now,” he said.

He reminded the crowd that the current generation has been “pounded by wave after wave of profound economic change.” Technology has revolutionized workplaces, increasing efficiency and allowing for fewer employees. Places like Pittsburgh, which once employed thousands of steel workers, are being forced to evolve to meet 21st century demands. Carnegie Mellon University is at the center of that evolution, he said — it was founded as a trade school for steel workers and has become a world-class research university, creating hundreds of new spinoff companies and more than 9,000 jobs in the past decade.

Obama also checked out the Flypmode, the first crowdsourced military vehicle, designed through DARPA’s XC2V challenge and hosted by Arizona firm Local Motors. The car was based on Local Motors’ Rally Fighter chassis, a muscular monster with 33-inch tires and 20 inches of suspension travel. The Flypmode was designed and built in just under six months.

Obama said Local Motors’ CEO, Jay Rogers, understood the value of a rapid-prototype vehicle for combat — he’s an ex-Marine who lost some friends in combat. Local Motors solicited designs on its website and chose a design by Victor Garcia, completing the design and construction ahead of schedule.

“Not only could this change the way the government uses your tax dollars — think about it, instead of having a 10-year lead time to develop a piece of equipment, if we were able to collapse the pace of which that manufacturing takes place, that would save taxpayers billions of dollars,” he said, “but it also could get technology out to the theater faster, which could save lives.”

Rapid-built prototypes could also trickle through to the private sector more quickly, too, he said.

Obama’s half-billion investment includes $300 million for national security industries and $100 million for research and training to develop advanced materials more quickly and more cheaply, according to the AP. Some of the $500 million would come from existing allocations to government agencies, but other funds are in Obama’s 2012 budget request, so they still must be approved by Congress.

While praising future technologies, Obama kept the message firmly about jobs: “As futuristic, and let’s face it, as cool as some of this stuff is … this partnership is about new cutting-edge ideas to create new jobs, spark new breakthroughs and reinvigorate American manufacturing today,” he said. “Winning the future begins with getting our economy moving right now.”

But he did have one message of encouragement for innovators: “The United States of America has your back.”