When disaster strikes and danger looms, the heroes that burst onto the scene to save the day might not even be human. 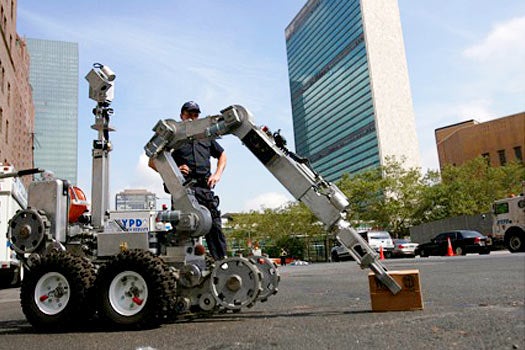 It’s hard to comprehend the bravery required for a person to run into a burning building rather than flee from it. But in the near future, first responders to harrowing disasters and emergency situations aren’t likely to even know what bravery is. Instead, they’ll be emotionless robots that only exist to accomplish the task at hand, helping police, firefighters and homeland security personnel do an even better job of protecting people and saving lives.

While the modern field of robotics has benefited from many bursts of innovation since the late 1950s, the last decade has been its renaissance. Mankind’s largest push to develop robots arguably began in the days immediately following the 9/11 terrorist attacks, when shoebox-size “PackBots” made by iRobot Corporation (best known for its semi-autonomous Roomba vacuum cleaner) were used to ensure the stability of rubble piles before first responders started their search for survivors at New York’s World Trade Center site.

Soon thereafter, robots were deployed into the Middle East and Afghanistan along with American troops, where unmanned ground vehicles (UGVs) were enlisted to defuse and detonate improvised explosive devices (IEDs). One memorable example of the critical role often played by UGVs is the HD-1 robot (made by Remotec, a subsidiary of Northrop Grumman), featured in the opening sequence of the 2008 Oscar-winning film “The Hurt Locker,” where it was shown helping ground troops detonate an IED.

To date, the U.S. Army has purchased more than 7,000 such robots from private companies, a large portion of which have been deployed in both Iraq and Afghanistan. According to the Wall Street Journal, at least 750 have been rendered useless by bomb blasts or otherwise lost in combat, undoubtedly saving thousands of human lives in the act.

From war zones to our own home towns, robots are coming to our aid
With the wars in Iraq and Afghanistan both winding down, the focus of many robot researchers, developers and manufacturers has shifted toward first response far away from the frontline, in efforts to protect those here in the U.S. Anti-terror bomb squads are one obvious customer base, as many of these machines are designed for explosive ordinance disposal (EOD). Remotec’s line of Andros robots, which can climb stairs and can be outfitted with a number of tools, are used by 90 percent of bomb squads across the U.S., says Mark Kauchak, the company’s director of sales and customer support.

Many different kinds of robots can help detonate or defuse bombs. Typically, they are controlled remotely and outfitted with multiple cameras and arm-like devices with grippers to lift and maneuver explosives. Some models can cut wires, or are outfitted with advanced sensors and chemical detectors to sniff out chemical and biological agents. Remotec’s F6B, the company’s best-selling bot, can also wield a shotgun to blast open doors, and can use other firearms to disable or detonate bombs, Kauchak says.

Bomb-detecting robots are even used at airports and by border patrols and port security personnel to thwart domestic terror threats. For example, a Boston-area company called Black-I Robotics built the LandShark Series D, a movable robotic platform powered by heavy-duty car batteries and electric hybrid motors that can be easily outfitted with an array of customized robotic capabilities such as sonar, minesweeping and explosives detection. The Massachusetts State Police bomb squad at Logan International Airport currently uses one such unit to screen for explosives. The company’s founder, Brian Hart, was inspired to build the device after his son, Army Pvt. First Class John Hart, died in an ambush in Iraq at the age of 20. Telerob, based in Ostfildern, Germany, specializes in robots used to destroy or disarm bombs, as well.

Robots like these can also serve as eyes and ears in dangerous situations, to help find survivors of terrorist attacks or natural disasters. “Almost any emergency situation you can imagine gets better with a robot,” says Susan Eustis, president of WinterGreen Research in Lexington, MA. Her firm’s market study on first responder robots suggests that the market for these types of robots is likely to more than triple in size from $440.4 million in 2011 to $1.6 billion by 2018.

Companies in the United Kingdom, Germany, Japan and Korea also make similar robots for first responders in such dire situations. Among these is the British company QinetiQ, based in Farnborough, which makes robots for HAZMAT and search-and-rescue, and the Talon family of robots that helped sift through rubble after 9/11 at the World Trade Center site. Japanese-made robots initially failed to help at the Fukushima Daiichi nuclear plant because they were vulnerable to radiation. But a caterpillar-shaped, radiation-tolerant robot called Quince (developed by scientists at Japan’s Chiba Institute of Technology) was equipped with cameras, thermometers, hygrometers and dust collectors, and eventually performed several missions there.

Increasingly, rescue robots are able to operate autonomously without direct control by humans. Researchers at Carnegie Mellon University and Georgia Tech, among others, are working to create robots that can communicate with each other and decide how best to explore and to concentrate their efforts. These robots can already create maps of a building’s interior using lasers, without any human input. Such capabilities can be hugely useful in the event of a fire, for example, where on-the-ground information can give firefighters a better idea of how to best tackle the blaze.

Firefighters in South Korea are already experimenting with the Hoya firefighting robot, which can explore a blazing building to search for people, measure gas levels and air temperatures, and transmit that data back to its human handlers, while withstanding temperatures up to 320˚ F. (The Hoya is rugged enough to provide invaluable reconnaissance without putting firefighters at risk, but will not remain operational in the direct 400˚-800˚ F heat of a typical structural fire.) Similarly, Waterboro, Maine-based Howe and Howe Technologies makes a remote-controlled robot called the Thermite that can actually fight fires by dousing flames with up to 600 gallons of water per minute from a multi-directional nozzle—that’s roughly three times the volume produced by a fire truck’s traditional “crosslay” hose.

Remotec’s newest UGV, the Titus, has several semi-autonomous functions, like climbing stairs without continued commands. And several iRobot products (like the five-pound FirstLook) are light enough to literally be thrown inside confined or inaccessible areas, and can turn over in place to right themselves and return to the spot from which they were thrown if they lose contact with their human counterparts.

On land, under water, or in the air, robots can lend a helping hand
Autonomy can be powerful, but it has its limitations. “A lot of people think you can turn on a robot and it’ll do its own thing,” Kauchak says. That’s fine if you want it to clean your carpet, but not if you want it to disarm a bomb or take out a bad guy. “When we are dealing with explosives or people in hostage situations, you don’t want to take the human out of that loop.”

Another area of research could link humans and first responder robots. A computer system being developed by University of Dayton researcher Vijayan Asari uses a small robot with a camera to recognize people’s faces and determine whether they are friend or foe based on a preset database. It then analyzes facial features and gestures to assess if the person is in pain, with the end goal of bringing wounded soldiers or survivors to the nearest medical facility. The same robot could be modified, though, to assess a person’s behavior and determine their identity, Asari says. “This application could be extended to any emergency environment where we can send the robot inside to automatically find individuals.”

Most first responder bots are ground-based, but some can actually fly. Several police departments around the country already use unmanned aerial vehicles (UAVs) in hostage and other emergency scenarios. These so-called drones are likely to be used more and more by law enforcement and homeland security, says WinterGreen Research’s Eustis.

In February 2012, Congress enacted a law that provides funding for a nationwide broadband network—First Responder Network Authority, or FirstNet—that will help police, firefighters, emergency medical professionals and others streamline communications during disasters and perform their jobs at a higher, and safer, level. This network “can be used to communicate with robots used in emergency situations” and should help encourage this market segment, Eustis says.

“We anticipate that by 2015 robots will be fully integrated in 25 percent of first-responder teams,” she says. There are already some 300 emergency response teams in the U.S. that use robots to some degree, she says, including those in major cities like New York and Los Angeles, as well as those in smaller cities and towns like Akron, OH.

A competition to determine the best-of-breed first responder robots
An important moment for many robotics developers will come this December, when the Defense Advanced Research and Planning Agency (DARPA) will hold the first of two remaining Robotics Challenges to identify the most capable ground-based first-responder robots. The machine contestants will be judged on criteria like how well they drive and exit a vehicle, walk through a pile of rubble, remove rocks from a doorway, climb a ladder, and break through a rock wall to find and close a leaking valve. The winner will receive $2 million.

The global competition, which started in 2012 and ends in late 2014, involves bots from a wide range of companies, universities, and governments. Most entries look humanoid, with two legs and arms—a logical design for performing human-like functions in spaces created by humans—but not all of them. One four-legged model built by scientists at NASA’s Jet Propulsion Laboratory, called the RoboSimian, incorporates the radial symmetry of a starfish with the aesthetic profile of a giant bug.

The NASA scientists, with their expertise gleaned from having built three robots that have successfully motored and drilled their way around Mars, may be tough to beat. But regardless of who wins, robots have climbed and motored their way to become a primary tool of first responders, and their use will undoubtedly grow. “We have aggressive forecasts on this,” Eustis says. “It’s just really getting started.”

Bio
Douglas Main writes about science and related topics for Livescience.com. He has written about a wide variety of topics for the New York Times Green Blog, Popular Mechanics, and Discover Magazine, among others. He received an M.A. in journalism from New York University and studied biology and English literature at Washington University in St. Louis. He lives in New York City.

The funds’ portfolio holdings are historical and subject to change. This material should not be deemed a recommendation to buy or sell any of the securities mentioned.

This is a sponsored article and does not reflect the opinions of Popular Science.