PopSci goes to the grand 2011 robot-off in St. Louis 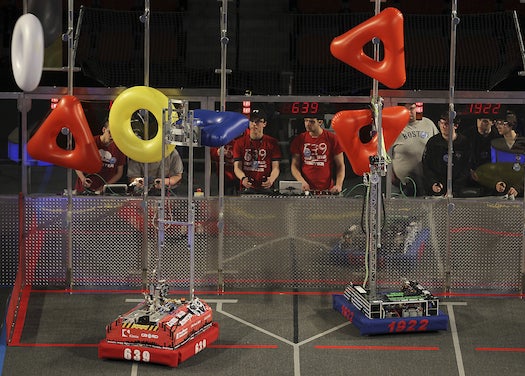 ST. LOUIS — The future of engineering is in the hands of kids like Alejandro Castro. He wants to be an aeronautical engineer, perhaps an unlikely option for a high school sophomore who lives in one of the poorest parts of California and whose parents work in service-sector jobs. But a one-armed wheeled cart named G-Bot will help make it possible.

Castro, 15, was the building manager for his school’s rookie FIRST Robotics Competition team, which won a regional award and catapulted an unlikely mix of Latino kids to the Midwest for a week. Castro is one of more than 12,000 school kids from kindergarten through high school participating in the FIRST Championship, a series of three events showcasing student-built robots and the new-cool culture of science and tech nerdiness.

“It’s the only place you can find 12,000 screaming kids that are all geeks,” said Atlanta-based volunteer Greg Welsch, whose son participated in the program in the past.

After he earns an aeronautical engineering degree, Castro wants to maybe work for NASA or perhaps a small private firm. “I want to help invent a cheap way to fly to the moon,” he said. Hey, good timing.

FIRST (For Inspiration and Recognition of Science and Technology) is the brainchild of entrepreneur Dean Kamen, who invented the Segway Human Transporter. Four annual competitions encompass every grade level — a Junior Lego League for ages 6 to 9, a Lego League for ages 9 to 16 and a Tech Challenge for high schoolers. But the main event is the Robotics Competition, in which teams of high schoolers must assemble a robot that can finish a task while guarding against others playing defense. Teams get a kit at the beginning of the school year, which includes basic parts, motors and software, which they can customize within certain parameters.

The robots’ task changes every year, and this year the goal was to loft three tubular balloons — a triangle, a circle and a square — onto pegs of various heights. The three shapes comprise the FIRST logo, and robots that arranged them in the proper order get more points. The more balloons you can place, the more points you get. At the end, the robots must deploy a mini-bot that can shinny up a pole, and the fastest one wins. Teams come up with different strategies for offense and defense, and they recruit partners to help fill in weak spots. Elaborate costumes are considered awesome, and nerds rule. In other words, it’s a great time.

G-Bot, designed by Castro and his friends, is shorter than most other robots, and the team’s strategy is to put as many balloons as possible on the lower pegs to rack up more points. It was enough to win them a rookie of the year award at regionals.

Then there are teams like the Westminster WiredCats, a team from the Westminster School District in Atlanta. The team’s strategy is to automate as many tricks as possible, letting their robot practically think for itself. “We pride ourselves on that,” said team member Tommy Fitzgerald, 17. 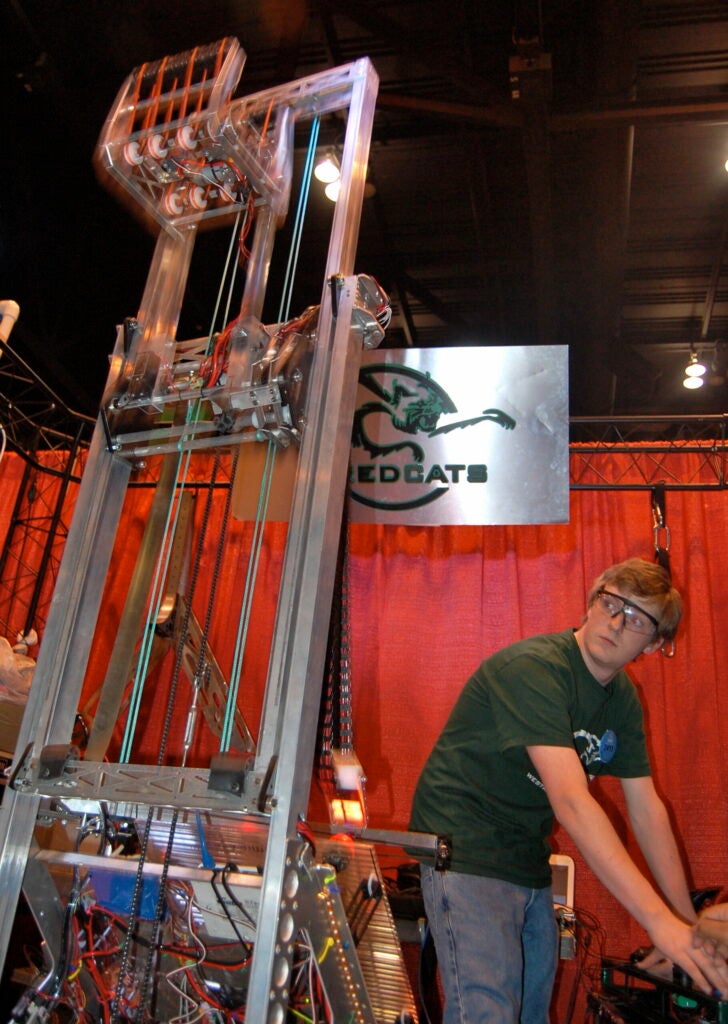 Atlanta high school senior Andrew Wynn, who will study mechanical engineering at Georgia Tech starting this fall, demonstrates the WiredCats robot’s speedy grabber, which drops to the floor in an instant and can automatically detect when it’s picked up a tube.

Their robot — which doesn’t have a nickname, because these guys are so serious — has a variable transmission, allowing it to drive at 16 feet per second or 6 feet per second, depending on whether it’s playing offense or defense. It has limit switches that raise the arm when the robot has successfully gripped a balloon, so team members don’t waste time making sure it’s ready. The control panel has buttons that correspond to every pole, so the drivers just have to press it once and the robot knows where to go, no frantic joystick action necessary. Its mini-bot uses surgical tubing and a neodymium magnet — really — to climb the steel pole with the utmost efficiency, reaching the top in 1.3 seconds.

“There are several other small things that set our robot apart from people that have to do it manually,” said Hailey Brown, 17, who plans to attend the Naval Academy to study architecture.

Even students who wouldn’t normally get excited about this stuff have fallen in love with it through FIRST. Though boys certainly dominate, there are several all-female teams, and most teams have at least a couple female members.

Before she walked through the machine shop doors, freshman Kyra Canning, 15, had no interest in engineering or machines, and thought maybe she wanted to be a veterinarian. Now the self-designated “machinist monkey” has a different outlook, and plans to study mechanical engineering.

“I learned how to operate machines, follow technical drawings, and use power tools. The amount of stuff I learned in six weeks was amazing,” she said. “I’m never leaving it.”

Along with the opportunity to design and build something, FIRST participants are eligible for more than $12 million in college scholarship funds. Access to that money, and the encouragement of mentors who help the kids build their robots, has been a game-changer for kids like Castro and his peers who attend school in California’s Coachella Valley, where two-thirds of students live at or below the poverty level.

Ultimately, the competition is a great equalizer, with wealthy kids on the same playing field as underprivileged ones, and nerds rubbing elbows with cool types like Will.i.am from the Black-Eyed Peas, who performed Thursday night.

The WiredCats’ Brown sums it up nicely: “It’s so much more than just building robots.” 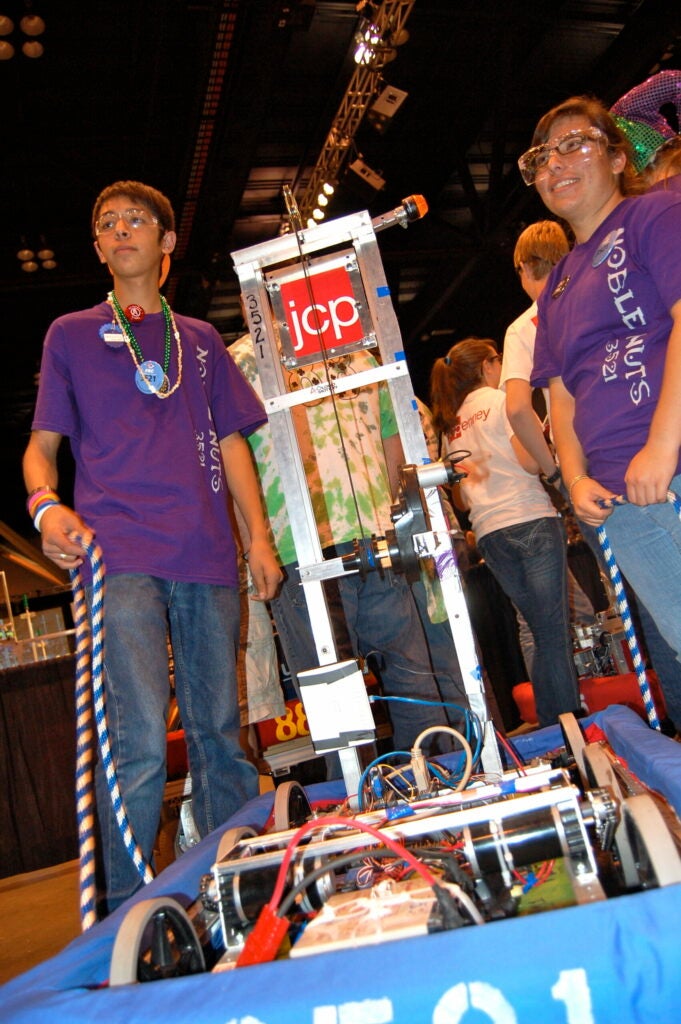 Gregory Moreno, left, and and Dulce Padron, right, both 16, prepare to corral their robot “G-Bot” into a ring for qualifying rounds at the FIRST Robotics Championships.
engineering
feature
grade school kids
robots
Science and Technology Videos