Modified Cotton Cleans Itself When Exposed to Sunlight

Future shirts and socks could clean themselves using just sunlight, chemists report — all you’ll have to do is drape... 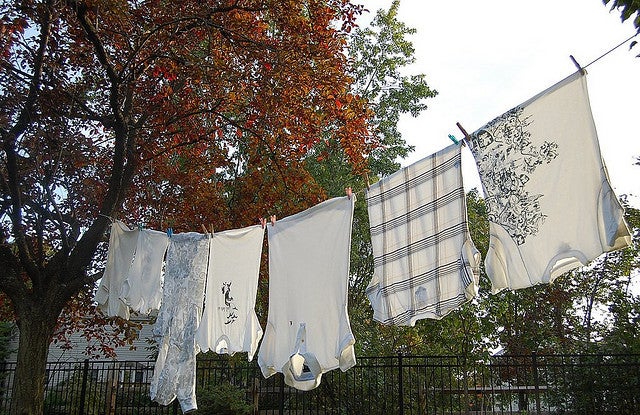 Future shirts and socks could clean themselves using just sunlight, chemists report — all you’ll have to do is drape them over the balcony and voila, clean laundry. A coating of titanium dioxide makes this possible.

Titanium dioxide is found in products like solar panels and sunscreen — it absorbs ultraviolet light — and in several cleaning products, because it can be used to oxidize organic material. Cement, paint, windows and even odor-free socks contain TiO2, which is prized for its ability to kill microbes and break down dirt.

Other researchers have incorporated titanium dioxide into clothes before, but they don’t get clean unless exposed to ultraviolet light, which isn’t exactly practical. Mingce Long of Shanghai Jiao Tong University and Deyong Wu of the Hubei University for Nationalities in Hubei, China, set out to create clothing with titanium dioxide coating that can self-clean using only sunlight.

To do this, they doped some TiO2 with nitrogen, which had been previously shown to work as a light-activated catalyst in visible light. They developed a new method to put this nanoparticle solution in liquid form, dunked cotton in it for one minute, then pressed the cotton, dried it and re-rinsed it. Then they added some silver iodide nanoparticles, which were intended to improve the fabric’s overall light sensitivity. The researchers stained the fabric with orange dye, and then exposed it to sunlight. The cotton broke down the orange, and also sterilized bacteria.

The best part: The coating remains intact after washing and drying. So even if you decide to break down and do actual laundry — or if someone does it for you — you can still revert back to the self-cleaning sunlight method later.

The paper is published in the American Chemical Society journal Applied Materials & Interfaces.