Lasers are getting smaller and more powerful — earlier this month, we saw the first-ever atomic scale laser, and now... 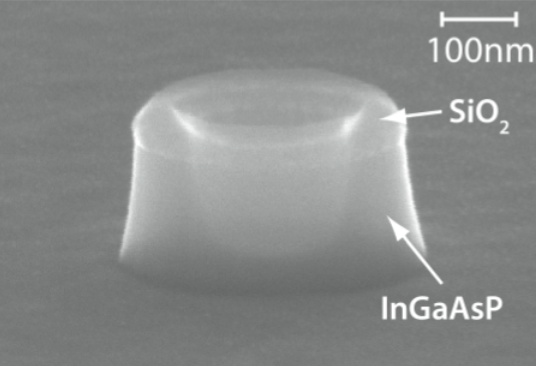 Lasers are getting smaller and more powerful — earlier this month, we saw the first-ever atomic scale laser, and now researchers are reporting the smallest telecommunications-frequency laser ever built. The laser is one-fifteenth the size of the light waves it can produce, and it works at room temperature.

Small lasers that produce wavelengths of light larger than themselves could be used to explore the fundamentals of quantum electrodynamics, and they could also have practical uses, including chip-based optical communications and ultra-high-resolution imaging. Lasers can transmit information faster than traditional semiconductors, and they might be more practical than quantum computers (if those are even a possibility).

These new lasers are an efficient step in that direction because they don’t require a high threshold to start lasing. They could even be designed to remove the threshold entirely.

A laser threshold is the energy level beyond which a laser’s power increases rapidly. When the laser cavity — the place where light waves are amplified — is very small, the threshold energy must be very high, but a lot of this input energy is wasted. This makes the tiniest lasers impractical. To get beyond this limitation, Mercedeh Khajavikhan and colleagues at the University of California-San Diego used a cylindrical co-axial arrangement — co-axial as in the type of cable that runs from your wall to the TV. Khajavikhan and colleagues built nanoscale lasers whose co-axial arrangement allowed them to capture all the energy of the larger laser that was used to pump them up, a huge improvement in efficiency.

“These nanoscale resonators should provide a powerful platform for the development of other QED devices and metamaterials in which atom–field interactions generate new functionalities,” the authors write. Their paper was published in Nature.