Invisible warriors: the engineering breakthroughs that will make everything from planes to subs to soldiers...disappear 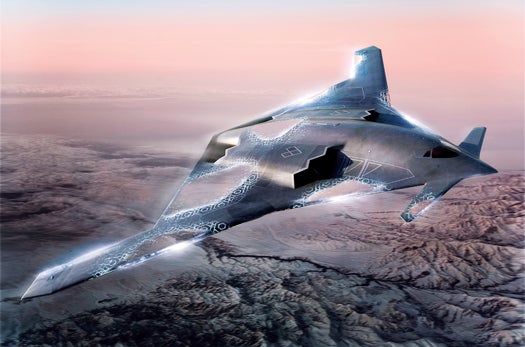 The youngest active stealth bomber in the U.S. turns 15 this year, and the other 19 B-2s in the Air Force fleet are nearly five years older. Meanwhile, the integrated defense systems they face have become much more sophisticated. Multi-static radar, which is now relatively common, is so sensitive that it can detect certain stealth craft. To stay ahead of such defense systems, the Air Force has budgeted $3.7 billion over the next five years to develop a successor to the B-2 that could be active by 2020. Actual designs of the new bomber are classified, but some secrets are already out.

Patents and bid proposals from Northrop Grumman, maker of the B-2, suggest that the new bomber will be narrower than the B-2 but maintain the familiar flying wing design, which reduces radar reflection by minimizing hard edges. Engineers are also testing new types of radar-absorbing coatings that could be customized to individual defense systems. And so a picture of the next generation of stealth bombers is beginning to emerge.

Most stealth coatings consist of a radar-absorbing material, typically a form of iron, suspended in paint. But they are heavy (which lowers fuel efficiency), need to be reapplied frequently, and don’t absorb all radar frequencies. Ceno Technologies, a particles-science company in Sanborn, New York, has developed a lighter, more durable coating that uses hollow ceramic spheres, called cenospheres. Because the spheres can be covered in carbon, silver or other metals that absorb slightly different wavelengths of radar, the coating can be customized to deceive specific radar systems.

The B-2 has two semi-flush air-intake vents, the hard edges of which can reflect radar. In one design seen in a patent from Northrop Grumman, the new bomber has four small vents rather than two large ones. The smaller vents can be buried more deeply in the wing, reducing the possibility of radar returns.

To confuse radar defense systems, the new bomber will probably carry something like the Miniature Air Launched Decoy made by Raytheon. The modified drones use radar reflectors to create bomber-like signatures that divert attention from the actual bomber. The decoys fly on a preprogrammed course for up to 575 miles and may carry radar jammers to further confuse air defenses.

In one design from Northrop Grumman, engineers included a canard wing on the plane’s nose, which would provide extra lift during takeoff and flight, allowing a smaller bomber to carry a heavier weapons payload. Because its straight lines and hard angles would reflect radar, the canard wing will most likely be designed to fold flush with the bomber’s body as the craft comes within range of defense systems.

The new bomber will most likely have a single weapons bay, as opposed to the twin bays on the B-2. It will still be able to carry conventional GPS-guided JDAM missiles, nuclear warheads and even the new 30,000-pound, bunker-busting Massive Ordnance Penetrator, but a single bay would reduce the cost of manufacturing—a major concern for designers on a relatively tight budget.