I have a vague memory of an exercise in elementary school in which, among other contrivances, the students smeared Vaseline... 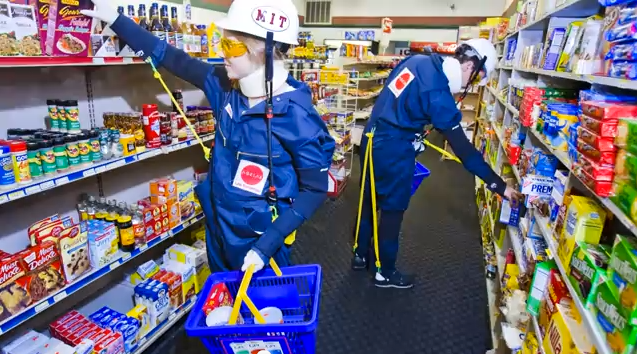 I have a vague memory of an exercise in elementary school in which, among other contrivances, the students smeared Vaseline on a pair of non-prescription glasses in order to simulate the effects of old age. As good as that science was, some researchers over at MIT created an impressive full-body aging simulation, complete with bungees (to bend the body and make everyday tasks more difficult) and a jumpsuit (because old people like jumpsuits (I think)).

A product of the MIT Age Lab, the project has the DARPA-level acronym AGNES, which stands, only slightly awkwardly, for Age Gain Now Empathy System. It’s a full-body suit that mostly relies on bungees to bend the body and make ordinary tasks more difficult. The helmet is bungeed to the torso, causing the wearer to bend forward; the wrists are bungeed to the hips, making reaching and grabbing difficult (but inadvertently providing an excellent resistance-band workout); and the legs are bungeed to the waist, making walking more strenuous.

There are also glasses which, in a less-oogy kind of way, are a rough analog for my childhood Vaseline goggles: they make reading small print more difficult.

Several presumably active students were outfitted in this uniform and set around a grocery store, having to cope with the physical impairment that old age brings. It’s not just for fun, though; as the population stays active longer, it’s important for all kinds of industrial designers, engineers, architects, and others to really understand how the elderly move about the world. There’s more to helping an aging population than injecting them with young mouse blood or all the ideas Bill Andrews is coming up with. Also, it’s probably fun.