In Afghanistan, supply convoys have been a favorite target of insurgent fighters, not only because they make warfighting possible for... 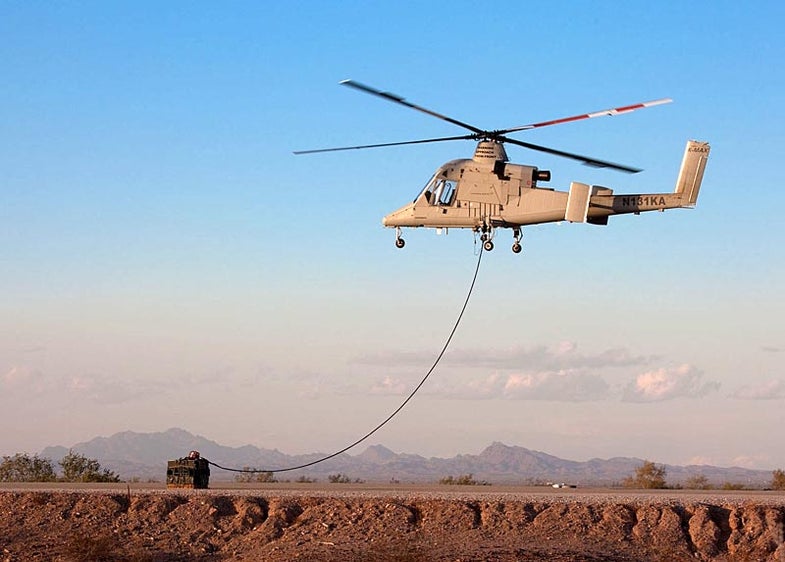 In Afghanistan, supply convoys have been a favorite target of insurgent fighters, not only because they make warfighting possible for troops at forward operating bases but also because they are so very vulnerable to ambushes and IEDs. But on Saturday, NATO logisticians hit a major milestone in Afghanistan, reaching out and touching one of the holy grails of robotic warfare when an unmanned K-MAX helicopter successfully delivered a sling-load of beans, bullets, and band-aids to an unspecified base for the first time.

Reportedly that first flight, along with a few in-theater test flights that preceded it last week, is part of a run-up to regular operations using the K-MAX, which is manufactured by Kaman Aerospace. The 2.5-ton, GPS-guided K-MAX can heft 3.5 tons of cargo about 250 miles up and over the rugged and mountainous terrain of Afghanistan across which NATO troops are scattered.

That’s important. IED and ambush risk aside, the terrain in Afghanistan isn’t always conducive to overland resupply. And putting choppers in the air introduces a whole new set of problems, including the risk of being shot down (or simply crashing). It also means you need to have a rested flight crew that hasn’t already maxed out its flight hours for a given period.

Automated GPS-guided helos can fly around the clock and do the bulk of their resupply at night since they don’t necessarily need to actually “see” anything. In fact, Danger Room reports that the Marine’s plan to run K-MAX mostly at night and mostly at high altitudes to keep it away from small arms fire. Because even unmanned aerial systems don’t like taking casualties.