Has Apple Gained Access to the World’s Most Advanced Manufacturing Tech?

Apple is known for nosing out unique and revolutionary manufacturing tech, and they may have just done so again, according... 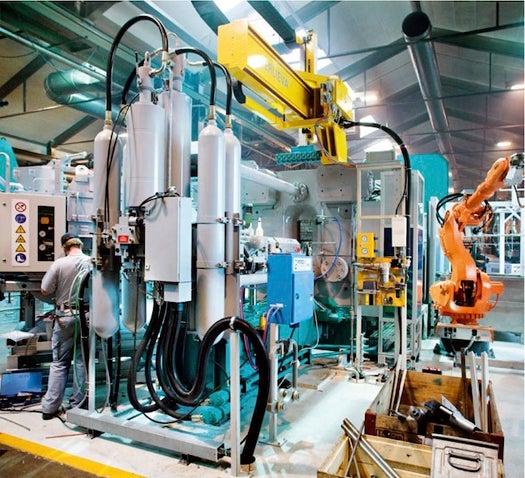 Apple is known for nosing out unique and revolutionary manufacturing tech, and they may have just done so again, according to the knowledgeable folks over at Cult of Mac. Insiders say Apple’s recent licensing deal with Liquidmetal Technologies is a play to gain the device maker access to the most advanced materials manufacturing technology on the planet.

Liquidmetal Technologies, a California-based manufacturing firm, is an under-the-radar fabrication company that has had its fair share of ups and downs in past years as it has tried to land contracts to manufacture a variety of objects from golf clubs to gadget cases. In doing so they’ve rooted out some issues with their own proprietary product, a hard and lightweight metal alloy that can be processed as easily as plastic.

But what’s got Apple interested is their acquisition of the world’s only prototype of an injection-molding machine that reportedly can create seamless metal parts just as injection molders make solid, single-piece plastic objects. Such a machine would allow Liquidmetal to manufacture anything from better iPhone antennas to seamless gadget cases, though some seem to think they might use the technology to manufacture the entire next-gen iPhone.

Why? Because Apple just signed an exclusive licensing deal with Liquidmetal to use its technology for commercial products reportedly worth some $11 million in ongoing dealings. Right now there is but one prototype injection molder in a factory in Korea, but with Apple’s financial might behind the technology there could be many more relatively quickly.

That means Apple could conceivably manufacture their wares at far reduced cost (though who knows if Lord Jobs might pass those savings down to the little people) while making the components durable, uniform, and — true to Apple form — very, very pretty. Supposedly Johnny Ive, Apple’s chief designer, is pushing hard for the Liquidmetal technology.

It’s worth noting in closing here that such rumors are coming from people involved in Liquidmetal, and that — also true to Apple form — Cupertino has nothing to say about whether or not they may or may not be possibly thinking about future long-term manufacturing with Liquidmetal. But if they do, it will be significant for a few reasons.

First of all, many fabrication houses have been trying to replicate injection-molding properties in strong metallic media for a long time, so if someone as big and reputable as Apple is getting on board it bodes well for the notion that the technology is finally catching up with the idea.

But further, though Apple has an exclusive deal with Liquidmetal, no licensing deal lasts forever. If the tech really is as good as Apple may or may not think it is, a variety of consumer goods — not just Apple products — could be manufactured more durably and at a lower cost. That’s good news across the board.