DARPA’s Transformer – sometimes referred to as the flying Humvee – seems to be moving right along, even if only... 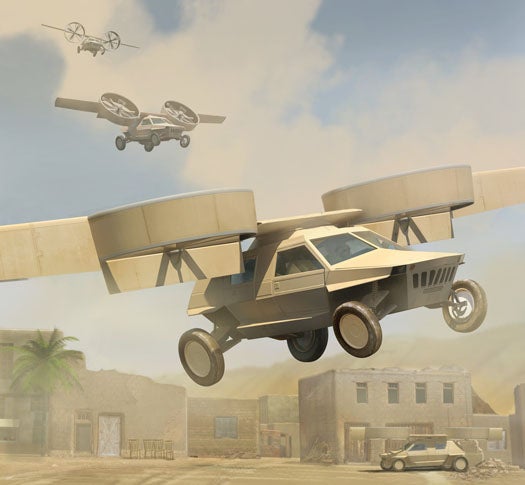 DARPA’s Transformer – sometimes referred to as the flying Humvee – seems to be moving right along, even if only on paper at this point. The DoD’s out-there tech incubator has awarded Carnegie Mellon University’s Robotics Institute $988,000 to develop an autonomous flight system for the vehicle, which would go a long way toward helping the proposed military vehicle get off the ground in both the literal and figurative senses.

The Transformer, you’ll recall, is a proposed four-wheeled vehicle capable of off-road terrestrial travel as well as flight. DARPA is asking contractors for a vehicle with vertical takeoff and landing (VTOL) capabilities, a 250-nautical-mile range on a single tank of fuel, a seating capacity of four, and a payload capacity of at least 1,000 pounds. The idea is to give soldiers terrain independent mobility, allowing them to leap impassable terrain or to avoid terrestrial threats like ambushes or improvised explosive devices.

Of course, part of that freedom of mobility means the average grunt needs to be able to operate the vehicle without a whole lot of extra pilot training. For that – and for any future commercial applications of the tech – vehicles like Transformer need to simplify the more complex tasks involved in flight, like takeoff and landing. Ostensibly, such systems could also be integrated into threat detection systems, automating evasive maneuvers if the vehicle detects the launch of an RPG or surface to air missile.

To do so it will need to maintain a good deal of environmental and situational awareness, and Carnegie Mellon certainly has the credentials to develop such systems. Its self-driving SUV won DARPA’s 2007 Urban Challenge – a race for autonomous cars – and its researchers have created systems that automate navigation in autonomous submarines and helicopters as well.

Right now there are two incarnations of the Transformer under development, one design from AAI Corp. and another from Lockheed Martin. Pratt & Whitney Rocketdyne was contracted $1 million to develop a lightweight diesel engine to propel the vehicle, making CMU the fourth technology collaborator that will hopefully propel Transformer skyward by 2015.