Robots Are Stealing American Jobs, According to MIT Economist

Forget the recession, immigration and the mortgage industry collapse — when it comes to loss of American jobs, robots are... 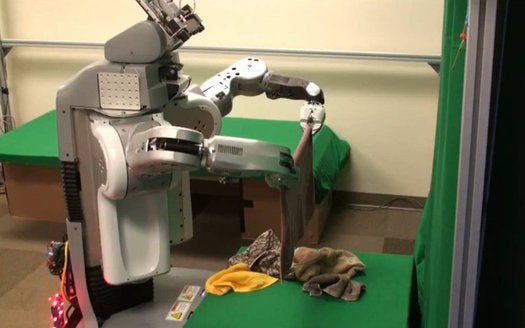 Forget the recession, immigration and the mortgage industry collapse — when it comes to loss of American jobs, robots are to blame.

That’s the conclusion of economists who have studied labor statistics and increasing job polarization, a growing disparity in pay among low- and high-skilled jobs. A handful of studies from the spring and summer have picked up steam in recent weeks, and they raise some interesting questions about the economy in the days leading up to Election Day.

Manufacturing is still strong in this country — it’s just that robots, not humans, are the ones manning the factories. If automation is the future of manufacturing, medicine and other fields, less-educated Americans could be left in the dust.

David Autor, an MIT economist, found in a study this spring that certain occupations that consist of routine tasks are more vulnerable to automation. (It’s a working paper, and he last updated it in August.)

The new issue of Good magazine explains his findings bluntly: “The middle class is disappearing in large part because technology is rendering middle-class skills obsolete.”

Autor’s study, conducted in collaboration with David Dorn of the Center for Monetary and Financial Studies in Madrid, classified tasks as routine or non-routine and graded occupations that involve those tasks. The Economist explains that secretaries, bank tellers and other clerks perform work that is highly routine, and thus vulnerable to automation and the loss of laborers. Jobs in this country are increasingly polarizing into high-skilled, high-paying jobs versus low-skilled, low-paying ones, and automation is a major factor, the study found.

A June study by European researchers also found the increased adoption of IT systems is driving the polarization. Industries that spent more on IT also saw the fastest increase in demand for educated workers, and the sharpest drop in demand for less-skilled workers.

In examining these studies, both the Economist and Good magazine call out our beloved PR2’s laundry-folding and beer-fetching capabilities, noting that an army of domestic helper ‘bots could eliminate the need for low-skilled workers. And it’s a fair question: When robots start doing dishes, washing our hair and even keeping tabs on our health, what will happen to domestic workers and hospice nurses?

That’s probably a long way off, as industrial robots still make up the vast majority of automated laborers in this country. The recession has taken its toll on them, too: 2010 was the worst year for industrial robots since the 1980s, according to the Fiscal Times.

Plus, robots can’t build themselves — yet — which means we’ll need workers to put them together. Yes, roboticists are generally more educated than the rest of the middle class, but this can be viewed as an opportunity. The Economist notes that for most of the last century, people’s job prospects rose commensurate with their education. The future will have room for robots and people, as long as we’re smart about it.

In any case, just be glad they’re not goats.