Pigging the Unpiggable: Robots Keep Gas Lines From Blowing Up

This new little piggy goes where the rest can’t 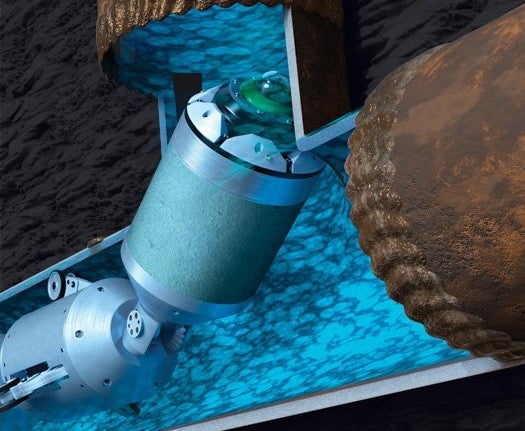 When a natural-gas line exploded late last summer in San Bruno, California, the ensuing firestorm raged for hours. The blaze, which took crews more than 12 hours to control, destroyed dozens of homes, injured more than 50 people, and killed eight.

Click the thumbnails to see how the most advanced PIG robot works.

The National Transportation Safety Board’s final report on the cause of the blast is still pending as of press time, but the incident has thrown a spotlight on the natural gas industry’s inadequate pipe-inspection techniques. Gas-transmission-line accidents have increased 72 percent from the 1990s to the ’00s, according to the U.S. Department of Transportation Pipeline and Hazardous Materials Safety Administration.

Since the 1960s, maintenance workers have used “smart” pipeline inspection gauges, or PIGs, to find rust, weak seams, thinning walls and other indicators that a pipe needs repair or replacement.

PIGs make a squealing sound while navigating tight passageways. They go where people can’t, but controlling them can be challenging because most depend solely on the pipe’s pressurized fluid for propulsion. “It’s very difficult to stop a PIG in one location,” says Karl Edminster, the head of Electromechanica, a Massachusetts firm that manufactures PIGs and other robotic pipe-inspection devices. “Imagine pushing a spitball through a straw.”

Moreover, nearly a third of the 1.3 million miles of natural-gas pipeline in the U.S. are “unpiggable.” Some pipes widen and then narrow; others have bends too acute to be navigated by current PIG technology. As these pipes age and corrode, the need to inspect them is increasingly urgent. Roughly 60 percent of gas-transmission lines in the U.S. were installed before 1970, and some date back to the Great Depression. Utilities are gradually upgrading from old cast-iron and steel pipes to non-corroding plastic ones. Even so, it’s still far more cost-effective to PIG a pipe than install a new one.

To Carnegie Mellon University roboticist Hagen Schempf and his colleagues, the opportunity to prevent disasters by building a more sophisticated inspection device was too good to pass up. After 10 years of research, and with about $1 million in funding from NASA and the U.S. Department of Energy, Schempf’s team recently debuted the Explorer-II: a 66-pound, eight-foot-long wireless robot that he describes as looking “like a series of sausage links.” Its segmented body navigates twists and turns with ease. Its strong drivetrain lets operators precisely control where it starts and stops, instead of being moved by the flow of natural gas like other PIGs are. And its custom-designed sensors detect tiny anomalies in pipe walls before they turn dangerous.

Conventional PIGs use permanent magnets to detect changes in the pipe walls’ magnetization that may indicate corrosion, but the magnetic field interferes with the PIG’s movement, slowing it down. The Explorer-II replaces permanent magnets with a compact electromagnetic coil that senses the same problems without sacrificing speed.

The robot recently proved its grit in Pennsylvania, snaking through 2,000 feet of previously unpiggable pipeline, and it’s now in commercial trials with a Canadian gas company. “There was a lot of gulping until we felt comfortable that we had a safe design,” Schempf says. “We built this for a dangerous, explosive environment, and that was always in the back of our minds.” 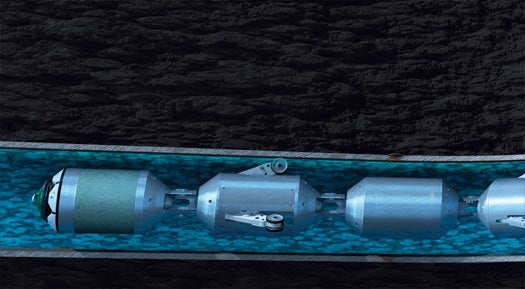 The Explorer-II is a wireless, remotely controlled, wormlike robot that can cruise through miles of gas pipeline on a single charge, beaming image and sensor data back to its operator in real time. It’s narrow enough to squeeze through a six-inch diameter pipe and flexible enough to wind around 90-degree pipeline bends. Here’s how it works. Legs Of its 15 legs, six have powered wheels and can extend and retract. The rest center the robot inside pipelines of varying widths. Drive Module The robot’s two fist-size brushless motors, one at each end of the robot, let it move independently of the natural-gas flow inside the pipe. High-Friction Wheels Inch-wide urethane wheels push out against the pipe’s walls, giving the robot enough traction to climb straight up even vertical pipelines. 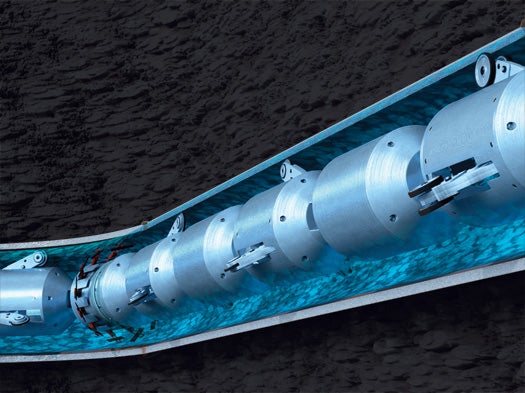 Sonde Cells Two sonde coils generate magnetic fields that allow operators to detect the robot’s location so it can be retrieved if the system fails. Onboard Computers A suite of onboard computers, controlled by the robot’s two 32-bit nerve centers, direct an array of essential functions, including steering, video processing, leg expansion and retraction, and wireless communication. Lithium-Polymer Batteries Packed tightly inside the robot’s power modules, the batteries allow inspections to last eight hours or morea€”very important given the thousands of miles of pipeline that need to be vetted on a yearly basis. A crew equipped with a single Explorer-II could inspect as much as two miles in a day. 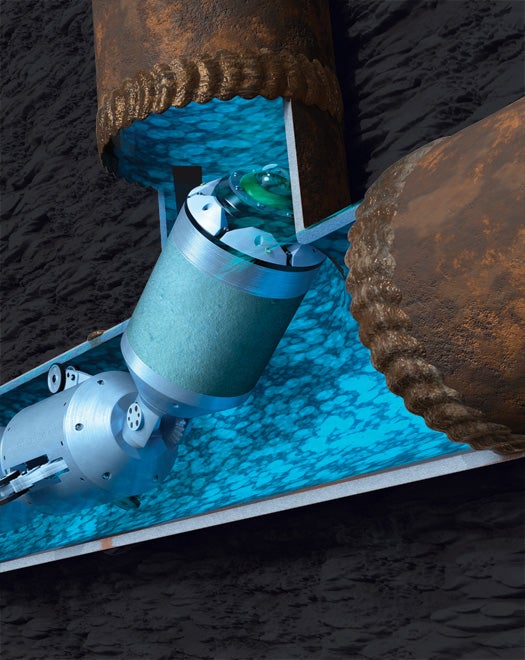 Fish-Eye Cameras Conventional PIGs can’t handle sharp bends because they can’t navigate. The Explorer-II’s fish-eye camerasa€”one at each enda€”have a 190-degree field of vision and send a constant stream of visual data 1,000 feet to the operator, who steers the robot. The cameras also let the operator detect potential damage, such as corrosion or failing seams. Joints Capable of 90 degrees of articulation in any direction, the robot’s joints give it the freedom of movement it needs to pass through sharp turns and bends inside pipeline systems. Current Sensor The robot’s dynamic electromagnetic coil creates a magnetic field in the pipe, which the ‘bot then measures. Minor variations in this magnetic field indicate differences in the thickness of the pipe’s walls, a sign of possible damage or corrosion. 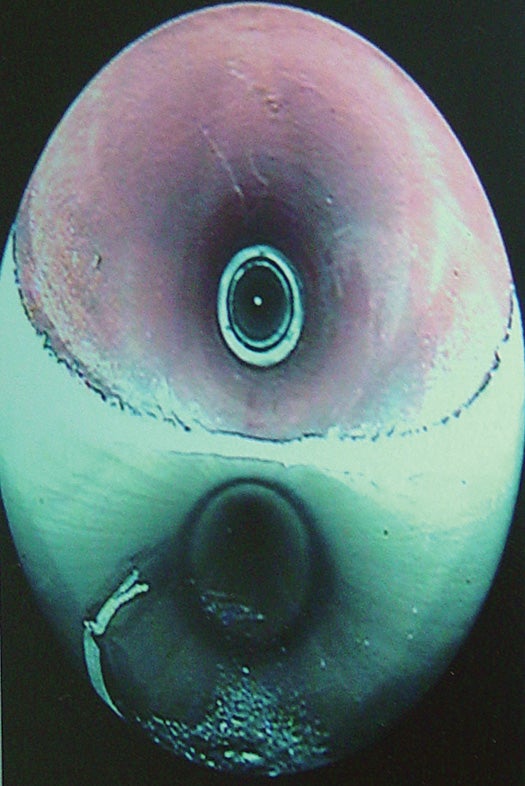 Image From the Explorer II’s Camera 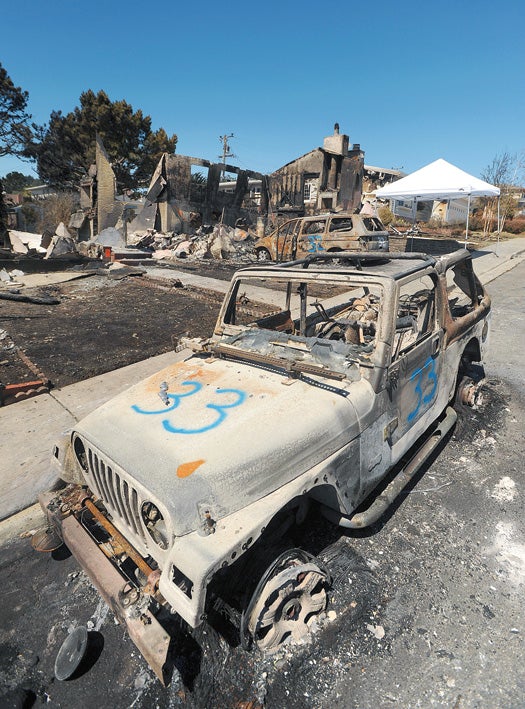 Damage From The San Bruno Firestorm