CHARLI was born in the lab of Dennis Hong, the robot maker who was chosen as one of Popular Science's Brilliant 10 in 2009 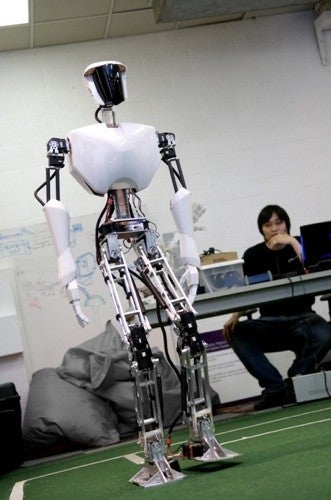 A group of undergraduate and graduate students at the Virginia Tech College of Engineering’s Robotics and Mechanisms Laboratory (RoMeLa) have unveiled CHARLI, which they are calling the first full-sized, walking, untethered, humanoid robot, complete with four moving limbs and a head, to be built in the United States. While walking robots are nothing new, this one’s humanoid counterparts, such as Petman and Honda’s Asimo, are apparently disqualified for lack of height, autonomy, and nation of origin.

We can’t verify the specs of every humanoid robot in every garage out there, so for now, we’ll accept the university’s claim that their machine is the first of its kind.

CHARLI (Cognitive Humanoid Autonomous Robot with Learning Intelligence) uses a built-in network of pulleys, springs, carbon-fiber rods, and actuators to move his limbs. At the moment, CHARLI can climb stairs and navigate uneven ground, which is more than most humanoid robots can do, and his engineers are working on technology that will allow him to talk.

CHARLI’s inventors began developing him in 2008 under the guidance of Dennis Hong, associate professor of mechanical engineering, director of RoMeLa, and Popular Science Brilliant 10 honoree. While designing CHARLI, they drew inspiration from science-fiction films and from the input of their more artistic spouses.

“The environment we live in is designed for humans: The step size of stairs, the height of door handles, etc., are designed by humans for humans,” Hong said. With that in mind, the CHARLI team focused on making a humanoid robot with motor skills that can handle human tasks. Despite the bar CHARLI has raised for other humanoid robots, its autonomy, hand movements, and overall intelligence, continue to present challenges for Hong and his colleagues.

There are two version of CHARLI in development: CHARLI-L, for Lightweight, and CHARLI-H, for Heavy. CHARLI-L, which will debut in Singapore’s RoboCup tournament later this year, can walk indoors and on flat surfaces. In time, the robot, which stands at five feet — towering seven inches over Asimo — will be able to kick soccer balls.

So far, CHARLI-H is just a leg, but upon completion, those legs will help him jump, run, and kick, as well as use customized actuators to stroll around the campus’s hilly terrain.

Since they had only $20,000 in funds and some donated equipment from National Instruments and Maxon Precision Motors, CHARLI-L’s inventors were forced to improvise on the usual mechanical issues. Check out the video below to see the robots in action and to hear the students talk about how they built CHARLI:

Granted, CHARLI has a ways to go before being ready to freely traverse the great outdoors, but Hong imagines that one day, he will put those moving limbs to good use by serving as a robotic housekeeper.

Correction: April 29, 2010
CHARLI L, the current robot, cannot walk on uneven ground. Down the road, that task will come from CHARLI H, who is just a leg so far.