Which is also its old deep space exploration vehicle 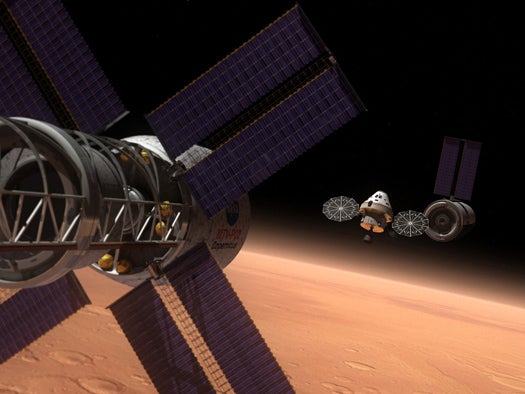 Today NASA announced a plan that was largely expected but is now official: Orion, the scrapped then not-scrapped crew module from the definitely scrapped Constellation Program, will serve as the backbone of a new NASA crew module slated to go into service by 2016. Lockheed Martin, which never stopped working on its Orion capsule, will continue developing the Multi-Purpose Crew Vehicle (MPCV), the next-gen rocket-launched capsule that will carry a crew of four on missions lasting up to three weeks.

The announcement, in some respects, is anticlimactic. We’ve known that Lockheed was still working on Orion, and it appeared all along that the company knew something that we didn’t–you don’t build a 41,000-square-foot Space Operations Simulation Center to train astronauts on a vehicle that you believe will be axed. And while the final MPCV won’t be Orion down to the very last bolt, it won’t be a wildly re-imagined spacecraft either.

That’s probably a good thing. NASA is temporarily out of the manned space business after the last shuttle mission launches in July, and it appears private spacefaring companies are ready to take over that role within this decade. So it’s time for NASA to look to a variety of missions beyond low-Earth orbit, and a multi-purpose vehicle is exactly what the agency needs.

Aside from being 10 times safer than the shuttles during launch and re-entry (so NASA officials tell us) the MPCV is truly versatile. It will be capable of both deep space missions and, if necessary, routine trips to the International Space Station. It will be able to dock with other spacecraft and support spacewalks. With 316 cubic feet of habitable pressurized space, a very patient and non-claustrophobic crew could conceivably man the capsule for up to 21 days in space.

For NASA, the announcement is less about the technology and more about settling some points that have been more or less up in the air. Since President Obama eight-sixed Constellation last year in favor of longer term goals that put Americans on an asteroid by 2025 and on Mars by the 2030s, NASA has suffered somewhat from a lack of clearly defined goals. Now, with a heavy lift rocket in the works and a final decision on the next crew capsule, the agency can get back to what it was designed to do: making giant leaps for mankind.