With just two shuttle mission left on the schedule, NASA’s next-gen crew vehicle had a big coming out party today... 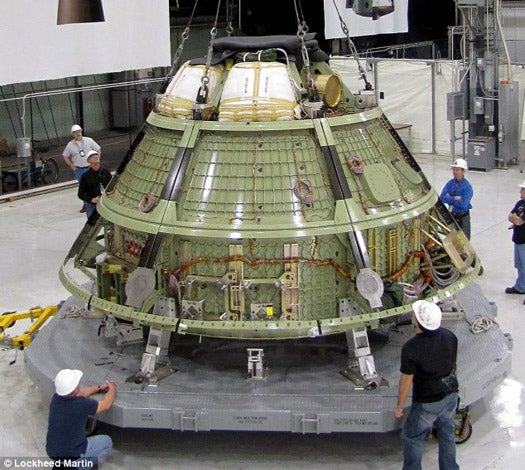 With just two shuttle mission left on the schedule, NASA’s next-gen crew vehicle had a big coming out party today as Lockheed Martin unveiled the first Orion spacecraft as well as a sprawling $35 million training center near Denver, Colo. Both the spacecraft and the astronauts that will eventually fly on it will undergo extensive testing here as the program ratchets up for operational deployment within just five years.

Refresher: Orion was part of the $100 billion Constellation program axed by President Obama last year when he rearranged NASA’s priorities to focus on deep space missions (Constellation was designed to put mankind back on the moon). But the Orion crew capsule was salvaged from Constellation, originally to serve as an escape vehicle for the International Space Station.

But in the intervening months in which NASA hasn’t exactly been given a crystal clear set of goals, the space agency and Lockheed Martin have turned Orion into a sort of multi-purpose space capsule that can serve as an escape pod and ISS resupply shuttle, but also as a potential deep space explorer. That means asteroids or possibly Lagrange Points for starters, setting the stage for a future mission to Mars.

The massive 41,000-foot Space Operations Simulation Center will train astronauts on the spacecraft, which will also undergo rigorous testing there and at Lockheed’s other nearby facilities. The capsule unveiled Tuesday will likely never go all the way into orbital space, though some parts of it might, as many components are reusable even though the capsule itself is not. Rather, after extensive ground testing it could be launched on a suborbital test flight.

All that could transpire relatively soon. Orion’s first orbital flight is slated for 2013 (construction of that vehicle begins this year), and in terms of sophisticated space vehicles, two years isn’t a lot of time. The NASA Authorization Act of 2010 calls for Orion to be ready for operational flight by 2016.