With No More Shuttles on Standby, What’s NASA’s Plan if the Final Mission Astronauts Need Help? 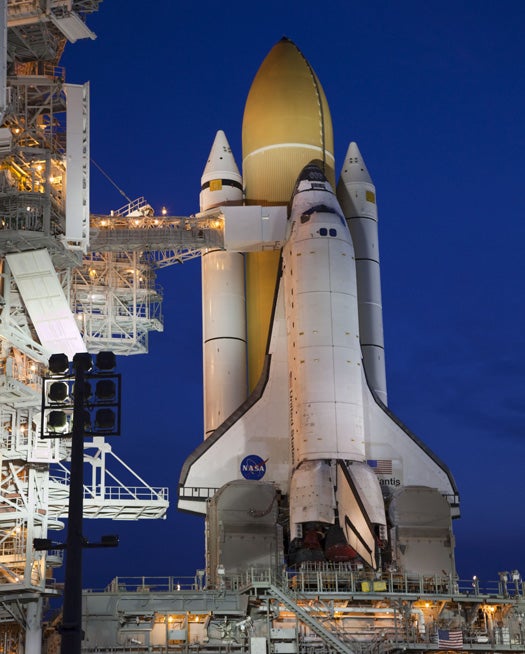 The next and final space shuttle launch is slated for tomorrow, with the shuttle Atlantis taking a crew of four to the space station for a 12-day stay. But with Discovery and Endeavour already in the process of being decommissioned (that is, stripped down in hanger bays), what happens if something goes awry up there with no backup shuttle ready to execute a speedy rescue? Naturally, NASA has a plan–but it’s one lengthy recovery mission.

Usually when any shuttle is in orbit there’s another one on the ground ready, on short notice, to head to the launchpad and come to the aid of its stranded companion (this emergency readiness has been ratcheted up since the 2003 Columbia disaster). With the remaining shuttles out of commission, rescue responsibilities for Atlantis’s final mission fall to the Russians. But since the Soyuz seats only three, the rescue operation would take a while to complete–nearly a year, in fact.

The odds of Atlantis encountering a problem that strands its crew are quite slim (and don’t think NASA hasn’t done the math; the odds are, by the agency’s calculations, exactly 1 in 560). But should the Black Swan rear its head, nothing would drastically change in the ISS rotation schedule. The Soyuz would continue their regular quarterly rotation missions. The only difference: each flight would carry two cosmonauts rather than three.

That would free up a seat for each Soyuz to bring one U.S. astronaut home. That means the first Atlantis astronaut would come home in just 80 days. But the last would spend 340 extra days in orbit–or nearly a year aboard the ISS.

Perhaps you’re putting two and two together now, and you are absolutely correct. Atlantis is flying with a crew of just four, and this contingency is the reason behind that decision. It’s the first shuttle mission to fly with only four astronauts aboard since Challenger’s STS-6 mission in 1983.