In 2007, Harvard scientists figured out how to combine fluorescent proteins to create an entire color palette, and then used...

In 2007, Harvard scientists figured out how to combine fluorescent proteins to create an entire color palette, and then used it to make mouse neurons glow so they could be traced through the brain. The “Brainbow” technique has helped scientists follow neurons’ connections, which had been almost impossible to untangle.

Fruit fly researchers have now done the same thing, producing a dual Brainbow of methods for making Drosophila neurons glow. It is much simpler and faster than staining individual neurons, another method for mapping brain connections.

Many neurons are visible in the above cross-section of a fly brain, which was published in the journal Nature Methods last week.

The image below was made with the dBrainbow method, which involves six colors that help indicate which neurons arose from which progenitor cells. This is useful for studying how connections form between neurons, as Technology Review explains. The red and blue groups are both olfactory neurons, but they arose from different progenitor cells. 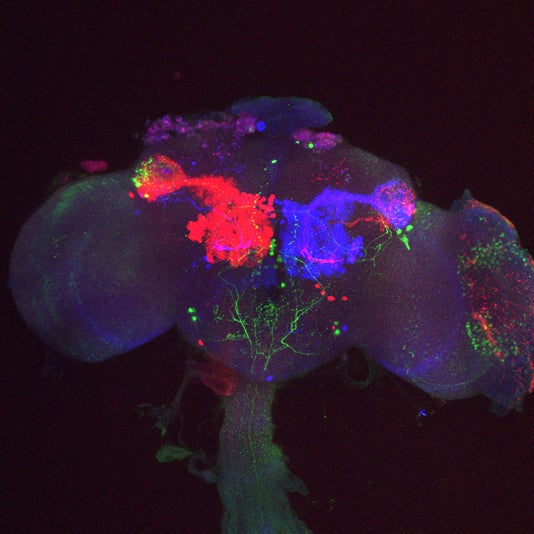 The Flybow method, which involves four colors, allows cells to change color at any point during their development by applying heat.

Scientists have plenty of techniques to manipulate fruit fly genes, which means they will be able to exert even more precise control over the colors, only illuminating certain neurons or subsets of neurons. Tech Review says. The following dBrainbow image shows a group of about 2,000 neurons that are thought to underlie male courtship behavior. 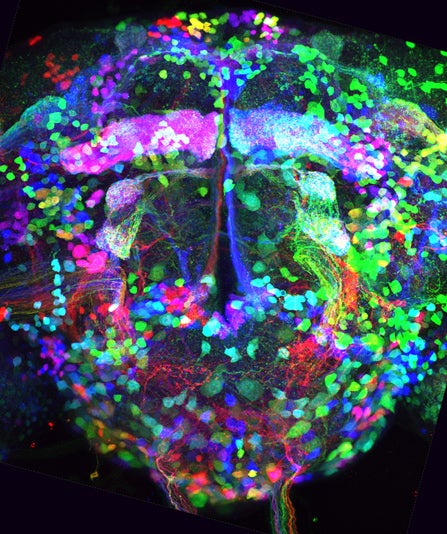