This Robot Can Hear Your Frightened Breathing, Even Through Walls

America’s fleet of flying military robots possess a variety of mission-critical capabilities—their speed and range allow them to quickly cover... 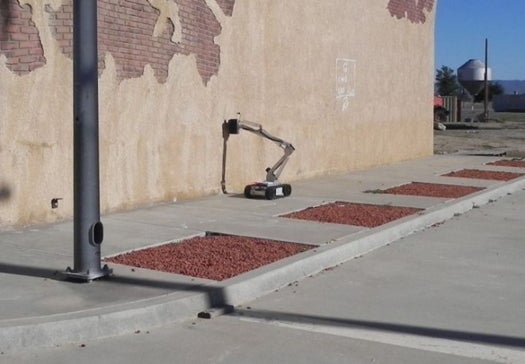 America’s fleet of flying military robots possess a variety of mission-critical capabilities—their speed and range allow them to quickly cover a lot of ground, and their sensor arrays can pick out ground targets in daylight or darkness—but they can’t do much to locate potential targets hiding indoors. But just try hiding from the Cougar20-H. The highly-sensitive ground-based ‘bot can hear you breathing—through a wall.

The Cougar20-H, manufactured by California-based TiaLinx, is the latest iteration in a series of sensor systems employing the company’s fine beam ultra-wideband (UWB), multi-gigahertz radio frequency (RF) sensor array (we’ll call it UWB RF). Its earlier Eagle5-N was a tripod-mounted radar that could detect breathing and monitor heartbeat through walls. An army grant then led to the development of the Cougar10-L, which essentially mounted the Eagle5-N on a small, remotely controlled robot.

But the Cougar10-L had to be very close to a given wall to “see” through it, making it less nimble and more obtrusive during stealth operations. So last week the company rolled out the Cougar20-H, boosting the radar’s power so it can sense through walls from a distance.

For search and rescue operations or standoff situations, though, such a robot could be indispensable (for instance, it could locate living but incapacitated persons trapped in the rubble of a collapsed building). It also could find applications in monitoring border traffic, not only scanning vehicles for signs of human trafficking, but also for detecting underground tunnels used by smugglers of both human and material cargoes.