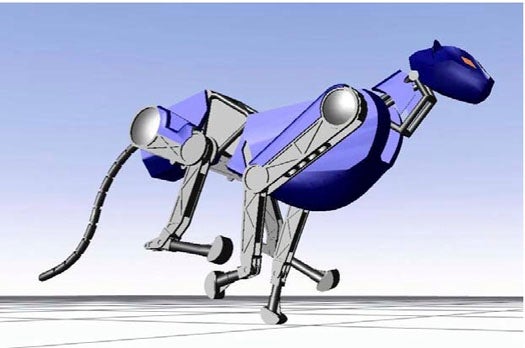 Boston Dynamics–developer of the headless humanoid PETMAN and the equally creepy Big Dog robots–has landed itself two more DARPA robotics grants to the tune of several million dollars each. New to the production queue: another humanoid designed to traverse rough terrain and a fast four-legged design modeled on the Cheetah that aims to be the fastest legged robot in the world.

ATLAS, as the humanoid will be called, will be a Skynet-styled super-strong, super-agile human-like bipedal robot that will build on Boston Dynamics’ PETMAN program. DARPA wants it to be able to climb, turn sideways to sidle through narrow spaces, and use its hands to augment maneuverability.

Cheetah, on the other hand, has one defining characteristic: speed. The four-legged ‘bot is expected to move at a pace of 20-30 miles per hour, but researchers see no reason why it couldn’t eventually keep pace with its biological counterpart.

“There’s no fundamental reason why it can’t go as fast as the animals (60 to 70 mph), but it will take a while to get there,” said Marc Raibert, Boston Dynamics’ president, in the Boston Herald.

DARPA is funding the initiatives out of its Maximum Mobility and Manipulation Program, which aims to create a framework for building robotic systems faster and enhancing their ability to move around and manipulate natural environments. If speed is what they’re looking for, the Cheetah is expected to deliver in more ways than one; the first prototype of the ‘bot is due in just 20 months.