Mind-powered car moves by the power of thought alone 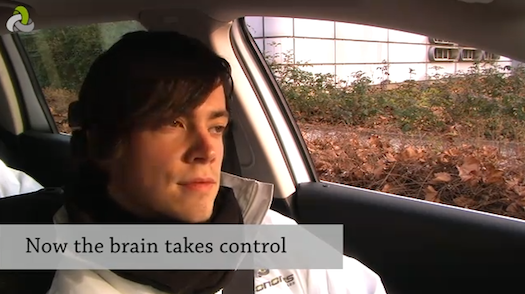 A team in Germany have managed to modify a car so that it can be driven with Emotiv’s electroencephalography tool, which allows a user to control something–be it a video game or a Volkswagen Passat–with only the power of the mind. Of particular note is the warning embedded in the video: Do not try this at home. Especially not in your regular, unmodified car.

Raul Rojas and his team at the Freie Universität Berlin are behind this latest autonomous car, though it uses tools from Emotiv, a San-Francisco-based company that we’ve covered before (Emotiv is responsible for the best of those “mind-reading gaming headsets”). This modified Passat uses essentially the same tools–it maps certain brain activity patterns to a certain command, which is then fed back into the car to execute said command.

There’s a delay of a few seconds on the contraption, which means this version isn’t exactly ready for the street, but as the driver’s smugly satisfied expression shows, it does indeed work. There are lots of theoretical applications for such a device, from new solutions for handicapped drivers or various location services, though for these to really take off, we might want to design a car without the clunky, soon-to-be-unnecessary steering wheel. Maybe a joystick or control pad for backup, instead?