At ‘Robot Japan,’ Bots Battle by Breaking Down (On the Dance Floor) 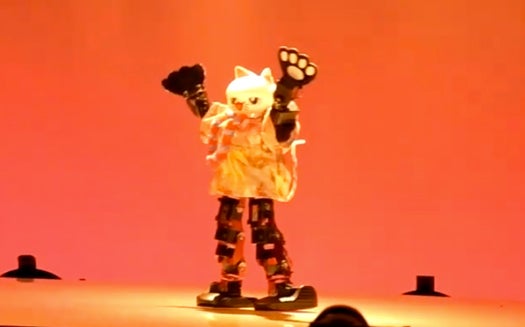 Robot Japan, a new competition aimed at small humanoid robots (though it seems some contestants played fast and loose with the “human” in “humanoid”) just held its first competition, known as Robot Japan Zero. There were two different weight classes for one-on-one robot fighting, and while that may sound awesome we were way more intrigued with the two-minute dance routine competition.

Why? Because these little robo-caricature-anthropomorphs are actually pretty awesome. There’s Cat Girl, who looks like she’s just came from the cocktail mixer at an anime convention:

Then there’s the more traditional fan dance, which – and maybe this is due to the loose costuming that doesn’t betray that common robotic jerkiness – actually moves quite fluidly for a servo-powered robot:

But the “PopSci award for best use of a dramatic musical opening to set up a badass floor routine by a robo-feline” goes to Dr. Giy’s Dancing Cat. Seriously, how does this little ‘bot bust these moves without falling over?