For Safety and Control, the Metal Bat Gets Reinvented

The Trend Hollow aluminum bats that strike balls more like wooden ones, mimimizing the often-unsafe boost of lighter, faster-swinging bats... 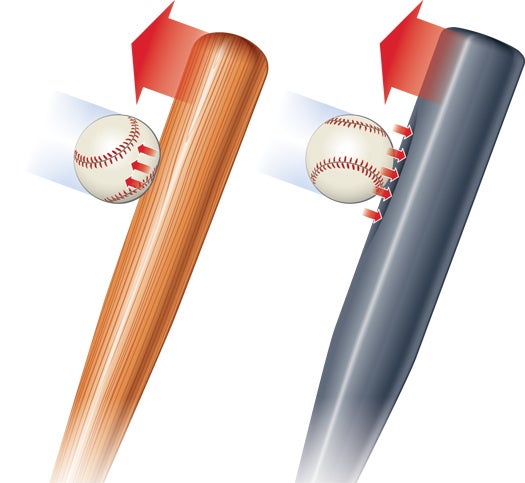 This season, high-school players in California must use aluminum bats that are BBCOR (bat-ball coefficient of restitution) certified. The rule, also enforced in the NCAA, limits how much bounce a ball can have off a bat. The more a bat gives on impact, the less energy a ball loses and the faster it flies; metal bats, for instance, bow inward and spring the ball forward like a trampoline. Pitchers are three times as likely to be injured by balls hit by non-BBCOR metal bats as by balls hit with wooden ones. To meet the standard, which will go nationwide in high schools next year, companies need to make their aluminum bats more rigid.

Forcing metal to act like wood cuts down on batted-ball speed and reduces the risk of injuries. Plus, one metal bat can last as long as 12 shatterprone wooden ones.

The Voodoo’s walls are held firm by a tapered metal ring low in the barrel. That positioning means the bat doesn’t need extra weights for balance, which keeps it light and easy to swing.
Demarini Voodoo; $300; demarini.com

Thickening the bat’s walls adds rigidity but also weight, so this Slugger is meatier only in the sweet spot. Its alloy is also 20 percent stronger than previous models, so it won’t deform.
Louisville Slugger Omaha; $200; slugger.com

Easton’s Reflex meets the BBCOR standard by adding an aluminum brace in the upper part of the barrel, making its shell especially the sweet spot—less likely to bow when a ball strikes.
Easton Reflex; $100; eastonbaseball.com