Inside the Army’s Next-Generation Shockproof Helmets 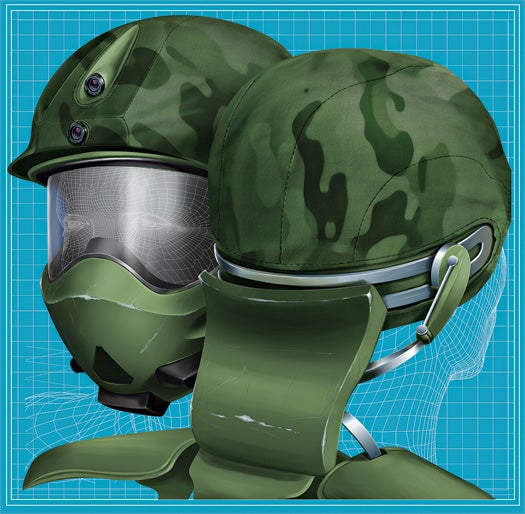 Improvised explosive devices are one of the biggest threats to soldiers in Afghanistan and across the world. They unleash a shock wave that can travel about 1,000 feet per second and hit with a pressure of 100 pounds per square inch. The U.S. Army’s standard-issue Kevlar combat helmet absorbs some of that force, but it isn’t designed to protect the soldier’s face from shock waves, which studies suggest can pass through the eyes, nose and mouth to the brain. Nor does it prevent a soldier’s head from jerking around, which can cause brain damage. Fortunately, Army researchers are exploring new designs that could someday protect troops from these hazards.

Helmets of the future will probably enclose the head for better protection, says Kenneth Curley, the physician coordinating the Army’s neurotrauma research while keeping tabs on other teams. Adding a face shield to combat helmets would cut about 80 percent of the pressure on the front of the brain, according to a software blast model published by Massachusetts Institute of Technology aeronautical engineer Raúl Radovitzky and his colleagues. Don Lee, the project officer of the “HEaDS-UP” Army Technology Objective, is developing shields for the face and other helmet technologies, which should be ready for review by 2013.

Other researchers are working on a customized shoulder-mounted harness to protect the head from whipping forward or twisting sideways. An Army analysis concluded that a Nascar-style head-and-neck – system would restrict solders’ vision too much, so Shawn Walsh of the Army Research Lab is designing one that won’t inhibit movement or vision. A fully functional demonstration harness should be ready this winter.

Because many soldiers choose comfort over safety, Walsh will pay special attention to solders’ complaints during testing. “Have you ever put on one of those costume Stormtrooper helmets?” Curley asks. “They’re not very comfortable, and you can’t see well or move your head around. We’ve got to strike a balance between practicality and the proper protection.”

An updated version of the Land Warrior system already in use would show maps, locations of fellow soldiers and enemies, computer-aided weapons sighting and alerts from commanding officers.

These guards deflect energy from a blast wave away from the eyes, nose and mouth.

The harness could support the added weight from the mask and prevent the head from snapping forward or side to side. The Army is also investigating a retractable option that would give full maneuverability when the harness isn’t needed.