Back in World Wars I and II, warships were painted with odd, cubist-looking geometric designs intended to confuse attacking weapons...

Back in World Wars I and II, warships were painted with odd, cubist-looking geometric designs intended to confuse attacking weapons systems. But other than looking cool, no one was sure if these zebra-esque paint jobs accomplished much. Now a new study says the designs can protect modern military craft even better than they did in the past.

The designs, called “dazzle camouflage,” are supposed to throw off an enemy’s perception of a ship’s size, shape, speed and direction — all key variables when launching a torpedo attack. The study, conducted at the University of Bristol, England, is the first to show that dazzle camouflage can actually work.

High-contrast dazzle camouflage could throw off an attacker’s perception of a target’s speed by a wide enough margin to cause a miss, the researchers said.

“In a typical situation involving an (rocket-propelled grenade) attack on a Land Rover, the reduction in perceived speed would be sufficient to make the grenade miss where it was aimed by about a meter (3.3 feet), which could be the difference between survival or otherwise for the occupants of the vehicle,” said Nick Scott-Samuel of the University of Bristol.

It all has to do with the way we perceive speed. Size, color and other variables all play a role in how we determine the speed of an object — larger objects appear to move more slowly, and changing light contrast can alter our perception of an object’s velocity. To gauge this effect, Scott-Samuel showed participants moving patterns on a computer screen and asked them to determine which one moved faster. 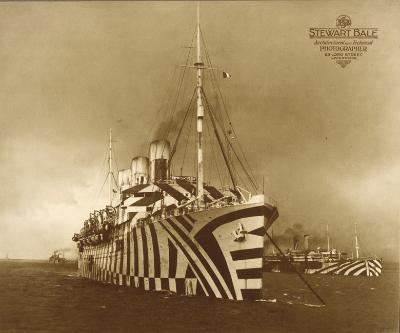 As seen in 1918, when the ship was serving as a troop carrier.

One pattern was plain, and the other consisted of typical two-dimensional dazzle camouflage patterns like zigzags and checks, according to a news release from the university. When the high-contrast patterns were moving quickly, the participants were less able to determine their speed, the researchers said. Two of the high-contrast patterns reduced the study participants’ speed perception accuracy by 7 percent — not much, but like Scott-Samuel said, it could be enough in a battlefield setting.

When objects were moving quickly, this type of camouflage was more effective than background-matching camouflage, like the green or brown patterns employed by most military uniforms.

Unfortunately, the importance of speed shows dazzle camouflage probably didn’t do very much during the two world wars. But we can thank our military forebears for coming up with something that would work well in the future.