No more battery-driven bugs for DARPA 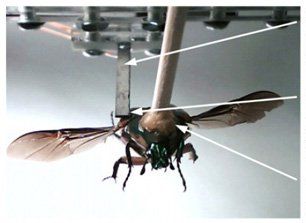 For years now, DARPA and other free-thinking research institutions have been developing micro-air-vehicles (MAV), usually modeled after insects. But building a tiny, lightweight flying robot is tough when you need a power supply–like an onboard battery–to keep the MAV flying. Then researchers turned to insect mind control–implanting live insects with machinery that lets humans manipulate their movements–but the problem remained: neural control hardware requires a battery to run.

Now, a team of Michigan researchers may have finally solved the battery problem by demonstrating an energy scavenger that derives power straight from the insects own wing motion.

Using a tethered Green June Beetle and a couple of piezoelectric generators mounted on its wings, the researchers were able to generate 45 µW (that’s microwatt, or one one-thousandth of a milliwatt) of power.

What’s more, they think they could improve that by an order of magnitude if they made the beetle a true cyborg and directly implanted the generators to the insect’s flight muscles. That’s enough power to run the onboard neuro-hardware needed to manipulate the beetles–which means basically the ability to tell a Green June beetle to fly depends on the power generated from flight.

That’s pretty cool, considering DARPA and the rest of the cyborg insect research establishment has a variety of roles in mind for the sensor laden drone insects of the future, including search and rescue, intelligence and surveillance, environmental monitoring and the like.