The Japanese robot, named "Athlete," does not quite have the balance of a human yet 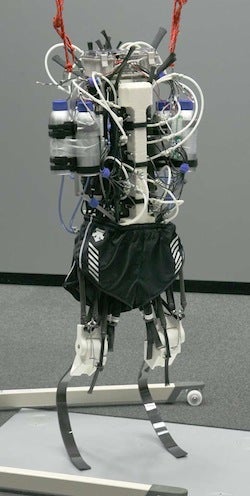 Japanese researcher Ryuma Niiyama’s robot is quite literally making strides in the field of robotics. His running robot, named Athlete, can only make three to five steps before falling down, but the bipedal robot’s gait is remarkably un-robotic, stemming from a musculoskeletal design that mimics human biology. With some further refinement, Niiyama may just create a robot sprinter that moves with agility and explosive speed of a human runner.

Athlete in the Lab

Athlete’s legs each contain seven sets of artificial muscles with up to six pneumatic actuators each, each one designed as an analog to a muscle in the human leg. The lower legs are less complex though still scientifically sophisticated; each leg is fitted with the prosthetic sprinting “blades” worn by amputee runners. Completing his human mimicry, Athlete dons a pair of black running shorts.

An inertial measurement unit mounted on the torso helps Athlete keep its “body” oriented properly, while touch sensors on each foot give the ‘bot a sensory feeling for where its feet are in a stride. Unlike traditional humanoids that run by changing the position of their joints, Athlete runs more like a human or animal, using its “muscles” and “tendons” to bounce off the ground and propel itself forward. Niiyama and colleagues are currently refining Athlete in the lab with hopes of moving their tests to an actual running track soon. So as you’ll see in the video below Athlete is no Aimee Mullins, but it’s taking steps in the right direction.