Though Homeland Security is scrapping its color coded terror alert system, researchers at Colorado State University are working to make... 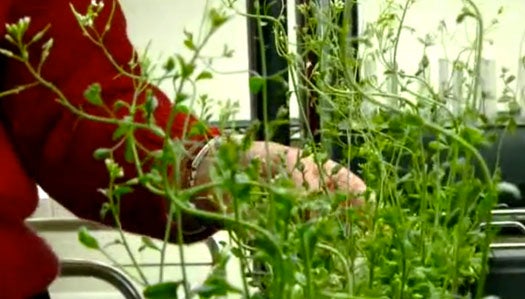 Though Homeland Security is scrapping its color coded terror alert system, researchers at Colorado State University are working to make green the color of anti-terror vigilance. Biologists there have developed plant proteins capable of screening the air for hints of dangerous substances, including those given off by nearby explosives.

Plants are already imbued with evolutionary defense mechanisms that help them detect and respond to threats. Receptor proteins in plants’ DNA respond to certain stimuli with certain biological responses. The CSU team—backed by DARPA and the Office of Naval Research as well as the Defense Threat Reduction Agency–has engineered proteins to respond to invisible threats like environmental pollutants or traces of explosives with visible responses.

The proteins are designed for integration into unassuming and unobtrusive chemical sensors. In airports or sporting arenas, for instance, plants that came in contact with trace chemicals from explosives would blanch white, visibly alerting nearby security personnel that explosives are in the vicinity. Currently the CSU lab has developed plants that turn white in the presence of TNT and is working with Homeland Security to create horticulture-based sensors for a variety of other chemical stimuli, though deployment of terror-fighting foliage is still a few years away. Once perfected, they could be as sensitive as a dog’s nose.

Perhaps best of all: the ability to monitor for dangerous substances is embedded in plant proteins rather than specific plants themselves, so they can be integrated into any plant. That means terror-proofing your apartment won’t mess up your feng shui.