The world's speediest piece of furniture, caught on film 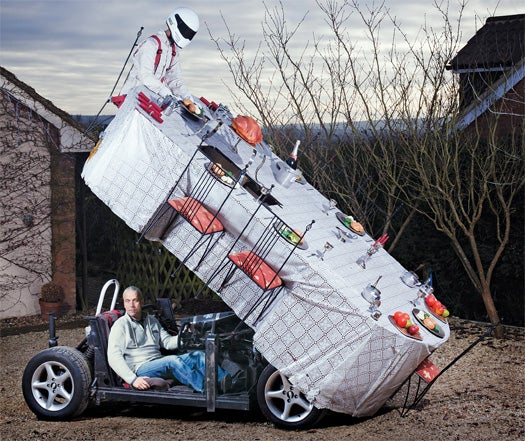 Why would a man construct a dining-room table that can cruise down a racetrack at 130 miles an hour and shoot flames into the air? Sheer competitiveness. A record for the world’s fastest furniture existed—92 mph on a sofa—and Perry Watkins wanted to beat it.

Watkins, a sales director in Wingrave, England, already held the records for building both the world’s smallest and lowest street legal cars. For the furniture speed record, he chose a dining table because he thought it would be easier to mount on a small, fast car. He started by buying an old two-seat Reliant Scimitar Sabre V8 convertible, ripping off the fiberglass panels stripping it down to the chassis, and installing an off-the-shelf nitrous oxide injection system for added power.

Although he expected some difficulties, he didn’t think the table would require extensive engine work. During the first test, however, the engine ran too hot and melted some of the pistons. Undaunted, he quickly found another engine and started again.

The resulting vehicle, dubbed Fast Food, smoked the record, clocking an average speed of 113.8 miles per hour. But it was the trimmings that really wowed onlookers. Watkins bolted real dishware to the table, as well as a variety of authentic-looking foods, including gravy made of fiberglass resin. The helmeted diner is actually a mannequin.

Watkins is the real man behind the wheel, with his head barely visible underneath a plastic chicken on a platter. The chicken is quasi-functional: Before kicking in, the nitrous system purges excess air through a tube leading to the fake fowl. “A six-foot plume of white smoke comes out of the chicken’s backside,” Watkins says. He figures that’s probably a world record too. 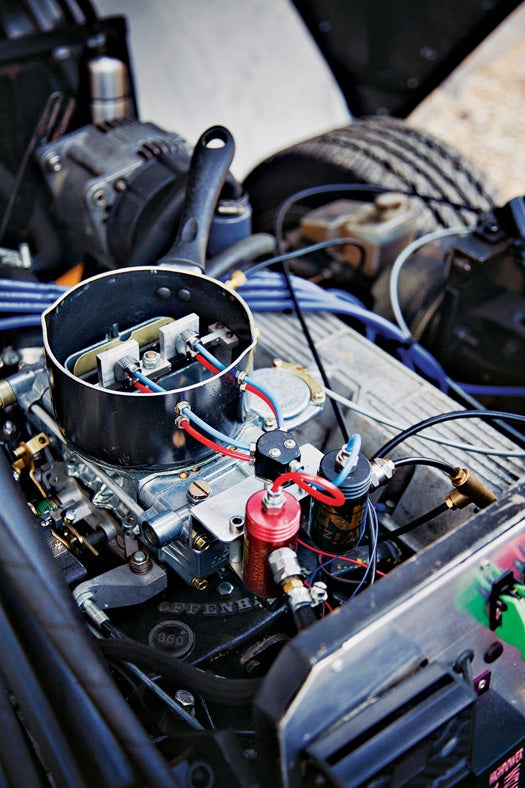 Watkins attached the table’s frame at the front of the car using pins. Bolted-on hydraulic rams let him easily lift up the table and climb into the driver’s seat underneath—a racing seat that he found discarded at a local track.

White smoke shooting out of a chicken’s backside wasn’t enough. Watkins also added a system beneath the table that sends high-pressure propane up into each of two teakettles. Teaspoons conduct the spark, and the resulting mix of air and gas can produce 10-foot-high flames, perfect for scaring any nearby sofa-drivers.