Paralysis patients could play music with their minds, using a new brain-control interface that senses brain impulses and translates them... 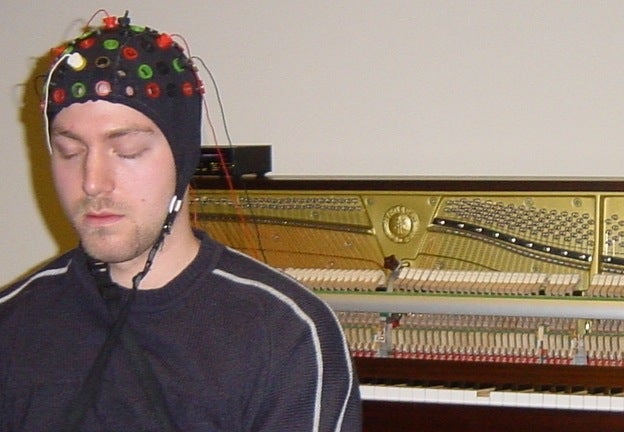 Paralysis patients could play music with their minds, using a new brain-control interface that senses brain impulses and translates them into musical notes.

Users must teach themselves how to associate brain signals with specific tasks, causing neuronal activity that the brain scanners can pick up. Then they can make music.

It’s a pretty unique use of brain-computer interfaces, which are already being used to do things like drive cars, control robots and play video games. The device was developed by Eduardo Miranda, a composer and computer-music specialist at the University of Plymouth, UK. A composer by trade, Miranda said he was captivated by the idea of using a musical brain-controlled interface for therapeutic purposes. “Now I can’t separate this work from my activities as a composer,” he told Nature News.

Patients with neurodegenerative disorders like Parkinson’s or Alzheimer’s can use music to walk to a rhythm or even to trigger memories or emotions. But stroke patients or those with locked-in syndrome can’t interact with music beyond just listening to it. With this system, patients with physical limitations might be able to use music for therapy, too — truly making music the medicine of the mind.

Like other brain-computer interfaces, a user calibrates the system — and his or her brain — by learning to associate certain brain signals with a stimulus. While wearing an EEG cap, patients focus their attention on four small buttons on a computer screen, each of which triggers a series of musical notes. The user must direct his or her gaze at the target corresponding to the action he or she would like to perform, Miranda and colleagues explain.

Miranda and computer scientists at the University of Essex tested the system on a patient with locked-in syndrome, who learned the system in about two hours and was soon playing notes along with a backup track.

By varying levels of concentration, she learned to vary the amplitude of the EEG, which allowed her to choose among the different notes, like striking piano keys.

A future version of the system would not require calibration, relying on advanced algorithms to sense a user’s neuronal response to each button, the researchers say.

The work is reported in the journal Music and Medicine.